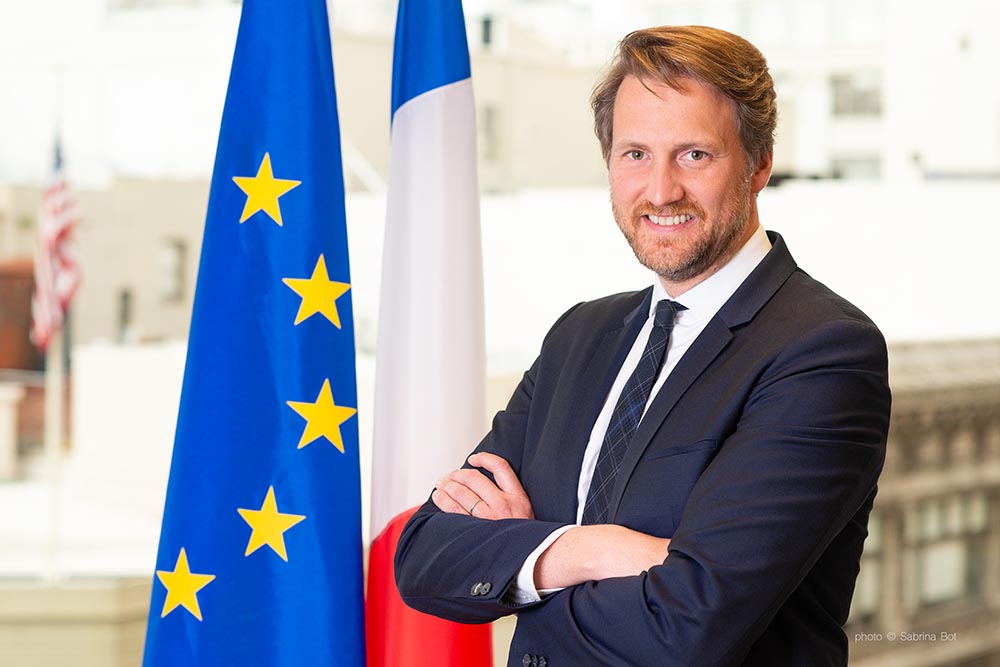 Just a year ago, we started this annual interview on a positive note when Frédéric Jung, Consul General of France in San Francisco, declared, “The deployment of vaccination strategies in American states, including California, represents real hope. It’s a light at the end of the tunnel. ”

Twelve months later, although the pandemic is far from being under control, we can see that the health situation is not so dire… for now. Thanks to research and vaccination, the fight against the virus and its variants has come a long way.

Once again, Frédéric Jung took the time to review the past year for us and, above all, to give us the outlook for 2022.

Can you come back to the significant events of 2021?

“The first good news is that immunization has been a game-changer and a return to normalcy for several months of the year.

Regarding the consulate, we were able to quickly start the consular tours again in 2021, which is essential to be as close as possible to the French nationals in the constituency; we have never issued so many documents since we handed over more than 4,000 passports in 2021 compared to less than 3,000 issued in 2020. It is a little paradoxical, while travel restrictions have for a time prevented most of us from moving freely. I want to point out that the consulate teams have done a fantastic job.

We have also provided exceptional financial assistance to the French citizens, who found themselves in a precarious situation and economic disruption due to a drop in income linked to the pandemic.

This grant, which represented 186K €, benefited about fifty families and came in addition to federal and local American aid.

I am happy to announce that this exceptional Covid program will be renewed in 2022. People who find themselves in a difficult situation can already contact us to complete a file and submit it.

In the good news series, we finally saw the United States’ travel restrictions lifted in November 2021, after many months of negotiations with the American authorities. It has been a great relief for many of us.

And then, always in this spirit of resuming “normal” life as soon as possible, we had the pleasure in July 2021 to welcome Mr. Philippe Etienne, Ambassador of France to the United States. He traveled for several days in the constituency to take the economic temperature, meet local political leaders, and present the Legion of Honor to the highly respected Thomas Horn, an early Francophile and chairman of the San Francisco-Paris Sister City Committee.

To end the year, in December, we had the visit of Roland Lescure, the Representative of the French residents overseas for North America and Chairman of the Economic Affairs Committee of the National Assembly of France. He too was keen to get back in touch with the community as soon as he could.”

Like many of our fellow citizens, we wonder if the past 18 months have impacted the size and the geographic distribution of the community?

“The size of the French expatriate community has decreased around the world, but this decline is nonetheless contained in our constituency. This is partly explained by the economic dynamism of the Tech companies, which employ many French people.

From a regional viewpoint, there is a slight shift from San Francisco to the rest of the Bay or even Sacramento, and our community has grown in Seattle; For the San Francisco Bay, the media talks about an “exodus,” but it is not entirely correct, at least for the French community.

And we should see a flow of arrivals by the time of the 2022 school year.

I want to point out that university exchanges have resumed with Berkeley and the other universities. The processing of student visas went fine as it was a priority.

I am also pleased to confirm that International Business Volunteering (aka VIE) is resuming this month in the United States.

As we all see, teaching French is a critical element of satisfying and maintaining the expatriate community. Do you have any updates on this matter?

“The constituency counts 11 schools recognized by the French Ministry of National Education, and the Lycée Français de San Francisco is the only fully accredited school in the United States.

Given the organizational difficulties and the additional expenses these institutions have had to face because of Covid, I would like to point out that an exceptional budget totaling 787,000 euros has been allocated according to their needs.

Generally speaking, teaching in French is a priority for us. We have maintained the level of scholarships for French nationals by allocating a budget of 2 million euros in 2021.

I want to point out that applications for school grants for French children can be submitted until February 17, 2022, for the 2023 school year.

We are fully committed to supporting the resilience of recognized establishments and bilingualism in general ”.

2022 will be a year rich in political deadlines with the presidential and legislative elections. Can you tell us how this translates to the Consulate?

“To begin with, I want to stress the need to register at the Consulate and on the electoral list to be able to vote. Make sure to renew your registration every five years.

Please note that registration on the consular electoral list must be made before March 4, 2022, for the presidential election and before April 29, 2022 for the legislative elections, but I advise everyone not to wait for this date (All information concerning the elections to come are on this page)

We are the second-largest constituency in the United States by the number of registrants, and the largest by area, with a territory equivalent to seven times the size of France. Therefore, we will increase the number of polling stations to 15 for the presidential election.

In addition to the 12 previous vote centers, the French citizens will be able to vote in person in Sacramento, Salt Lake City and will have an additional center in Seattle.

It should also be possible to vote online for legislative elections if the system is technically validated”.

Can you tell us about economic activity in sectors where we historically meet a lot of French citizens?

“Tech industry as a whole is doing well, and French entrepreneurs continue to come ‘scale’ here even if France now provides a favorable ground to startups that look for their first rounds of funding.

San Francisco and the Bay remain the first destination for major fundraising when looking to access the American market and more substantial funding.

Note that we encourage the return to France of French talents who occupy high-level positions in Tech companies in the United States. In most cases, they have been exposed to the growth of their startups, know what it’s like to recruit on a large scale, and grow a business. They have the right reflexes to feed the French ecosystem.

What I am telling you for the French citizens is also true for the Americans who would like to settle in France. For the latter, the French Tech Visa system simplifies visa administrative procedures for individuals and their families.

In the two other sectors where the French citizens are most represented, the wine industry and the hospitality business, the past year has seen ups and downs, but I would like to talk about two great successes: the fact that Christian Moueix’s Château Dominus 2018 was voted best wine in the world for the year 2021 by Wine Spectator magazine and that Chef Claude Le Tohic received his first Michelin star for One65.e

Overall, the impact of the pandemic on the hospitality industry has been very tough, but we hope it will pick up in a few months.

Finally, I would like to stress that the research sector is doing well and that the Scientific Service of the Consulate General supports many programs.

For example, the “NETVA” accelerator program, run by the scientific service, supports French deep-tech startups every year to familiarize them with the American market.

In 2020, this program welcomed CNRS researchers whose startup was developing a product to combine medical tests and the dissemination of results on smartphones. This company, called Grapheal, has just been awarded the “Best in Innovation” Award at CES 2022. Now, Grapheal is in line to see its product approved by the FDA.

The Consulate General is also very involved in the partnership between UCSF and the Institut Pasteur. The ties are being strengthened for even closer collaboration. ”

On January 1, 2022, France took over the presidency of the European Union. Does this affect the constituency?

“Although we are geographically far from Europe, Yes, the French Presidency of the European Union has an impact on us.

Among the ambitions displayed by the EU, there is the desire to put in place a “new growth model,” which includes the climate change issue and a large Tech section.

Europe wants to implement its stated ambitions in terms of greenhouse gas emissions i.e. a 55% reduction in emissions by 2030 to achieve carbon neutrality by 2050.

This objective involves setting up a carbon adjustment mechanism for trade at the EU’s external borders. Therefore, there will be a direct impact on trade with the United States, among others.

But the aspect which is even more impacting for us locally is two legislative packages that must be voted soon by the European institutions: the DMA (Digital Markets Act) and the DSA (Digital Services Act).

The subject is key on this side of the Atlantic; the penalties imposed are potentially very high, and the impact will be significant for big tech companies, which in parallel call for more regulation.

To conclude on France’s presidency of the European Union, I would like to add that the Czech Republic must succeed France from July 2022. Still, as there is no Czech General Consulate locally, France will hold the local presidency of the EU for the whole of 2022.

As such, we will organize working meetings with local political, economic, cultural, and research leaders over the next twelve months.”

We have exchanged about Cultural Affairs too during this interview as Villa Albertine in San Francisco has officially started to host French artists this month. We will have the opportunity to share the news throughout 2022.