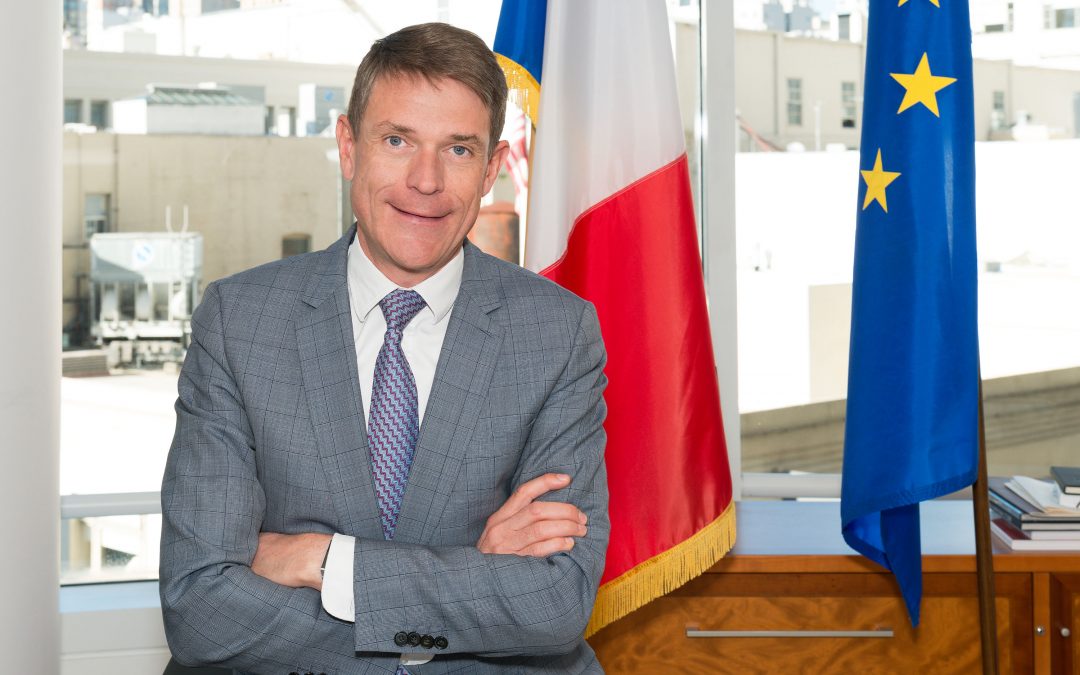 We met with Emmanuel Lebrun-Damiens, the Consul General of France in San Francisco to glance back on 2019, on budgets, education, but also on the 2020 cultural programs, the upcoming consular elections … in brief on the life of the French local community at large.

In a nutshell, can you give us an overview of the size of the French community in the constituency and in the Bay Area?

At the end of 2019, there were exactly 29,362 French citizens registered at the Consulate and this figure fluctuated around 30,000 throughout the year.

The San Francisco Bay alone brings together 25,000 of our fellow citizens. This number is stable but the numbers are growing faster in Seattle thanks to the hires of French made by Microsoft or Amazon in particular.

It is a plateau compared to previous years but it is very difficult to know if this figure reflects the evolution of the size of the community, for two reasons.

First of all because the French do not systematically register with the Consulate; that’s a shame, because it would enable them to receive useful information, for example to be kept informed of security conferences like those held in the event of natural disasters.

But also because most do not know that registration is only valid for five years.

It is common for some people coming to the polling stations to realize that their registration is no longer valid because they have not renewed it.

We saw a strong increase in number in 2017 before the presidential and legislative elections, and in 2019 for the European elections

In 2020, we hope to see the numbers increasing again with the consular elections thanks to information campaigns that we carry out regularly. Registration will also be open until April for an election in May 2020.

In summary, this plateau of 30,000 does not necessarily reflect a halt in the growth of the number of French. It is far too early to draw conclusions.

How would you describe this French community in the Bay Area?

It is an important community that is doing well. It is interesting for a Consulate because it is very much in touch with the local economy and with Tech in particular.

Last year, we looked at the number of start-ups founded by French people and at companies that had French people on their management committee (the famous C-level).

We opened a website where the French could report. After verifying that the founder was French or that their function was at the management level, we counted 600 start-ups throughout the Bay.

It’s fantastic ! We show the best of what we do in terms of Tech. And we are both present in the ecosystem of start-ups but also in very large American companies such as Microsoft, Salesforce, Facebook, Google, Apple…

What about the French wine community?

What is very interesting to observe in the wine community is the diversity.

You have three main types of profiles:

In general, the business is doing well, not to mention the “food”. The French gastronomy very present in the Bay Area, always meets a great success.

Do you have any changes to report or figures to share regarding education, the teaching of French in the constituency?

I know that this is a subject that is dear to the hearts of many of our fellow citizens and I am happy to announce that the figures for school scholarships for the year 2019-2020 are increasing.

There are of course social criteria for accessing grants but all students that meet the social criteria are accepted. The scholarships we award do not systematically fund 100% of tuition fees but the Consulate obtains each year the amount necessary to pay a grant to all those who fulfill the conditions of award. This is an important point.

Any other good news on the budget?

Absolutely! We also pay disability allowances or social assistance for the elderly in great difficulty (CCPAS), which is a system of assistance not very well-known by the community.

There too, the budget went from 56,000 euros in 2018 to 74,000 euros in 2019. We are working with locally elected Consular Advisors (Conseillers Consulaires in French) and Honorary Consuls spread across the ten States of the constituency, to better publicize the existence of this aid.

The beneficiaries are often French who no longer have any direct link with a family in France and who have no parents here either; we don’t pay them big sums of money but it still helps them a lot. Locally elected representatives play a real role in this aspect of social assistance.

The last budget that increased significantly is the budget called STAFE (support to the French non-profit established abroad). It is a subsidy that benefits French cultural or educational non-profits. This year, the commission approved the requests of ten of them for a total amount of 97,000 euros. Our Consulate gave the most in the world.

The number of French schools is increasing in the district but not in the San Francisco Bay where they are already well established. We have two new French schools in Seattle, one school in Portland. They are not all certified but they are French schools.

In San Francisco Bay, the number is stable but I would like to point out that we also have two charter schools, one in Santa Rosa and one in Oakland, which work very well. Oakland in particular is a very interesting case because it was founded by American and French families but especially because today, there are students who come from all over the world. We hear all the accents. The level of French is remarkable enough that they were awarded the “France Education” label last year. They passed all the criteria hands down.

Talking about 2020 initiatives, what will be the big events in the domain of culture?

This year the global theme defined by the Institut Français and the Ministry of Foreign Affairs is “Etre vivant”. From this global theme, each participating city defines a local theme with their local partners and for San Francisco, it will be “Living on the Edge”.

These are environmental issues, the consequences of the fourth industrial revolution with robots, artificial intelligence, this impression that we are on the verge of a new world with risks, dangers, consequences such as climate change, but also opportunities with noticeable progress in many areas… and this is what will be at the heart of the Night of Ideas debates.

You will discover the list of speakers on our site but I can already tell you that we have a partnership with l’Obs news magazine and the quarterly review America. The chief editors of these respective media will be present. This is a real plus because it gives us a direct link with France.

I am particularly proud of the partnership that we have built with the City of San Francisco, SFMOMA, KQED and of course the SF Library where the event will take place. In terms of large organizations that matter in local cultural life, it’s hard to find better. In addition, it allows us to discover how these large institutions work, and it’s really very interesting.

Cinema will not be outdone: 2020 will see a lot of important events starting with an Agnès Varda retrospective at SFMOMA and BAMPFA between January and March.

But we also have the ambition to increase European initiatives. We will participate to the Bay Area Book Festival where we will have a Franco-German pavilion.

Finally we are part of the project called “The Grid” which aims to understand how the world of Tech will change the perception of art for citizens.

We have already done a lot of interviews and studies to find out what people who are involved with the fourth industrial revolution think about artistic production. The report was presented in November. It gives a first overview of the relationships between artistic communities and Tech companies based in Silicon Valley.

What are the concrete changes that the French community will be able to benefit in 2020 from the Consulate?

We will open the administrative services for another half day because even if the number of registrants at the Consulate was stable in 2019, there was an increase of more than 20% in the number of identity documents issued from one year to the next.
We went from 3,522 titles in 2018 to 4,247 in 2019.

Therefore, we will open the administrative service on Wednesday afternoon in San Francisco to allow an even more efficient service.

You have made a qualitative consultation with the registrants. Can you communicate results?

We do not yet have the consolidated data from this online consultation, but according to the interim results, we are in the green.

We also watch very carefully, and very regularly, what people put on social networks about the quality of our services. We are systematically beyond 4 out of 5.

You will be coming to the end of your posting to San Francisco in the Fall. Have you set specific goals for the next eight months?

First of all, I would like to mention the visit of the French Ambassador to the United States, Philippe Etienne who starts a tour in our constituency this week.

Our fellow citizens are also welcome to the conference open to the public that he will give in Berkeley on Tuesday, January 14th at 11 am. The theme will be “Tech for Good – French Vision of the Fourth Industrial Revolution“.

But I also want to emphasize that I wish to make the elections of Consular Advisers a democratic moment by which the French community living abroad expresses itself under the same conditions as if it were in France.

It is the unique opportunity for French people living abroad to take part indirectly in the election of senators and to stay in touch with France.

Why it is difficult to make friends in Silicon Valley?
Tracking your expenses in a budget is easy and free!
Outdoor Swimming Pools in San Francisco Bay Area 2022
Can virtual reality unlock doors for dyslexic students? Einstein Studios answer
French Citizen Relatives: How to Claim your Official French Health Pass
Bilingualism - 20 podcasts in French for kids and teens