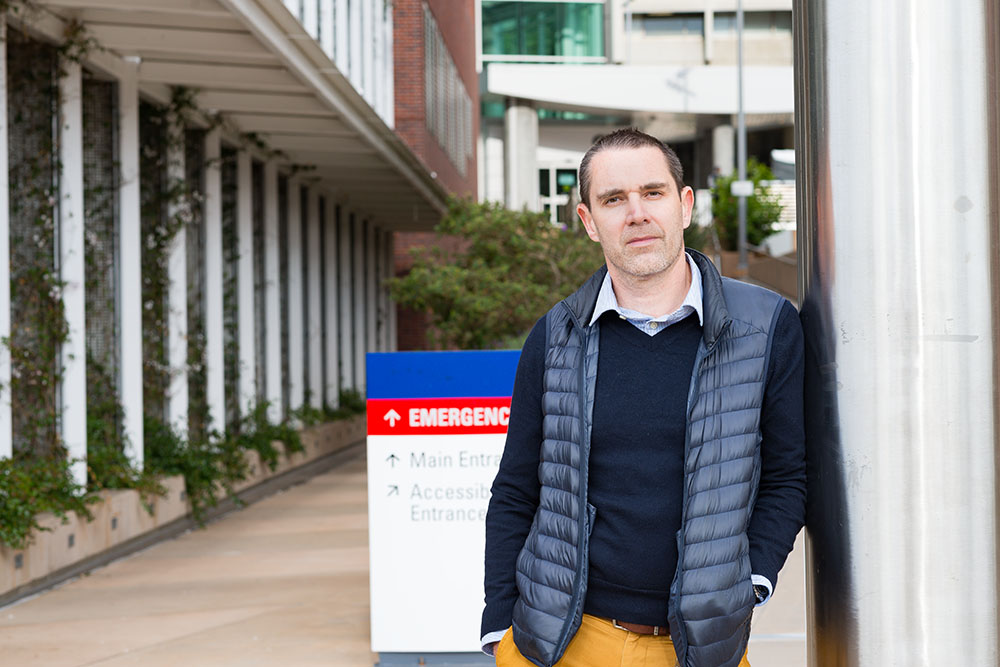 After sharing his time between the Georges Pompidou hospital in Paris where he occupied equivalent functions and UCSF, this professor of biostatistics is now living in San Francisco where he manages his department at the ZSFG and pursues research at UCSF.

To date, there are barely more than 10 fatal cases due to the Covid 19 in the city of San Francisco, and about 50 in the county of Santa Clara … These figures seem low compared to the rest of the world. Do you have an explanation?

“There are pieces of evidence and a potential hint. The way of life and the density of the population of San Francisco implies that its inhabitants have less interpersonal contacts than in a city like New York; the use of public transportation is limited.

Moreover, it is indisputable that the decision of a very early confinement had a positive effect, as did the ability of the San Francisco population to switch to remote working. All of these factors obviously played a role.

But there is a third element that is not yet demonstrated but which is being tested at this very moment: the possibility that there is more immunity among the population of the bay than had been anticipated.

A team from Stanford is currently testing the hypothesis that the virus may have circulated by the end of 2019. The virus was still unknown at the time, but we know that there are many exchanges with Asia in general, and with China in particular.

By consequence, the population could have developed a larger herd immunity than had been anticipated. It is being evaluated. We don’t know yet, but it is possible.

From the numbers floating around, it sounds like the most affected populations are the Latino and African-American populations in the United States. Do you confirm those numbers?

There too, there can be a bias … We observe that these populations are diagnosed with Covid 19 at a fairly advanced stage of the disease. The proportion of people who need hospitalization, or even hospitalization in intensive care, could be higher than in the other groups. Probably that they stay longer at home before coming to get tested.

These disadvantaged populations have more difficult access to care, and present themselves in a more advanced stage of the Covid. Consequently, they are probably over-represented in the statistics.

Another factor that explains these figures among the Latino or African-American populations is that they are unfortunately still under-represented in local industries such as technology. By consequence, they have less ability to work remotely, more persistent contact with the public, and more risk of being infected.

Do you have new projections, new figures to share with us regarding the disease development in the region?

The models that were originally developed are being widely reviewed in the light of daily figures.

It looks like we will be projecting a slightly lower number of cases than we had anticipated at the beginning. By consequence, the presence of the disease might be extended over time. This illustrates the famous concept of flattening the curve, which consists not in reducing the total number of cases, but in stretching out the duration of the epidemic to avoid saturation in healthcare services.

We seem to be in the situation of a relatively flat curve; It is therefore possible that the disease will circulate a little longer but that it will be less deadly in the bay area than elsewhere.

Yesterday, The Wall Street Journal mentioned a potential overreaction of the immune system to the virus. It implies that this overreaction would provoke death …

Absolutely! There are many hypotheses going on about the mechanism of the most severe form of the disease.

We have not yet fully decoded how this severe form develops, but there is in part an inflammatory over-reaction. The part of the immune system that triggers inflammation appears to be overreacting.

Amazingly, the severe form of the disease does not appear to be linked to the presence of significant amounts of virus. There are even cases where the virus is no longer found when the disease is in full explosion.

It is not unique to Covid, we find this phenomenon of overreaction of the immune system in other pathologies but the reason which triggers it in this specific case, is not yet fully understood. This is precisely the subject of many researches.

Do you think that using the plasma of recovered patients can be a solution? Could it be deployed on a large scale?

This is one of the many avenues on which research is being done at the moment.

The use of plasma had been brought back in the context of Ebola. It is theoretically quite attractive but in practice it raises the question of making it available on a large scale.

Getting enough plasma from people who have produced antibodies and developed immunity to the disease is complicated. I hardly see this track as a large-scale solution. As things stand, its deployment seems to me to be a hindrance.

In France, there is much talk about a “StopCovid” app that would be installed on individuals’ phones who would then get an alert if they happen to be into contact with someone who is infected. What do you think about this idea?

From a purely scientific point of view, it is obviously easier to steer a policy when you know where the people at risk are, it is a fact. But to be effective, it would require a quasi exhaustiveness of this information. It is impossible! Not everyone has access to technology, no one can guarantee that the technology will work all the time …

I think that if the deployment is partial, it will not be very effective. It’s a nice theory but the benefit is not huge in my opinion.

I can even tell you that we have raised the subject of an app within UCSF at the start of containment but that we have quickly buried the idea.

This does not preclude consideration of the possibility of offering the tracking in a targeted manner. I do not believe in this solution on a large-scale base, and in my opinion, it requires voluntary participation.

It is undeniable that the lack of centralization makes it difficult to have a coordinated response in the event of a crisis. Quickly setting up inter-regional collaborations like those that we have seen in France would be impossible here.

France is organized through what is called the “Plan Blanc”. As soon as the decision to activate the so-called Plan Blanc is made by the government, a whole series of actions are triggered which orchestrate all the players in the healthcare system at the national level.

Here, states and cities have a role to play upstream in terms of public health policy, but in the event of a crisis, they will not, for example, immediately facilitate the distribution of patients between UCSF and Kaiser.

If two hospital structures decide to work together, this is initially based on individual initiatives. So it makes it more complicated to collaborate, but our department at UCSF recently sent a contingent of twenty caregivers to New York. This was possible by personal relationships between the two structures.

Do you have a recommendation for wearing a mask?

This is a complex question because it is not clear what level of completeness it takes for this solution to be effective. If you take the example of South Korea, as soon as the flu season arrives, everyone wears a mask. Even if it is not perfect, it is very likely to decrease the spread of the disease.

But here if we only encourage people to wear a mask without imposing it on everyone, we do not know if this would have a significant effect.

But let’s imagine that we impose the wearing of masks, and that people have access to quality masks, in sufficient quantity… Would that contribute to the success of deconfinement?

This seems to be an option but the effectiveness is not yet known. It seems that this can participate in the deconfinement measures but again, we do not know its exact effectiveness.

In the case of China, it seems that it works, but we have to wait for the necessary hindsight.

There is also a factor to consider, which is the seasonality of the infection and the rate of circulation of the virus that is not yet known. If you take the influenza virus model, we know that this seasonality exists with a peak, then a decrease which is linked to the life of the virus, but also to the fact that the population is immunized by being exposed to this virus.

In the case of the Covid, once there is a significant proportion of the population exposed, there will be less risk that the deconfinement will go wrong. Then, time is a fundamental element before deconfinement.

Continue to follow the rules dictated by the public health department! If it is to remain confined and to respect the rules of social distancing, they must be followed.

If we spontaneously get out of confinement, only relying on over-interpreted optimistic signs, we risk reigniting the circulation of the virus.