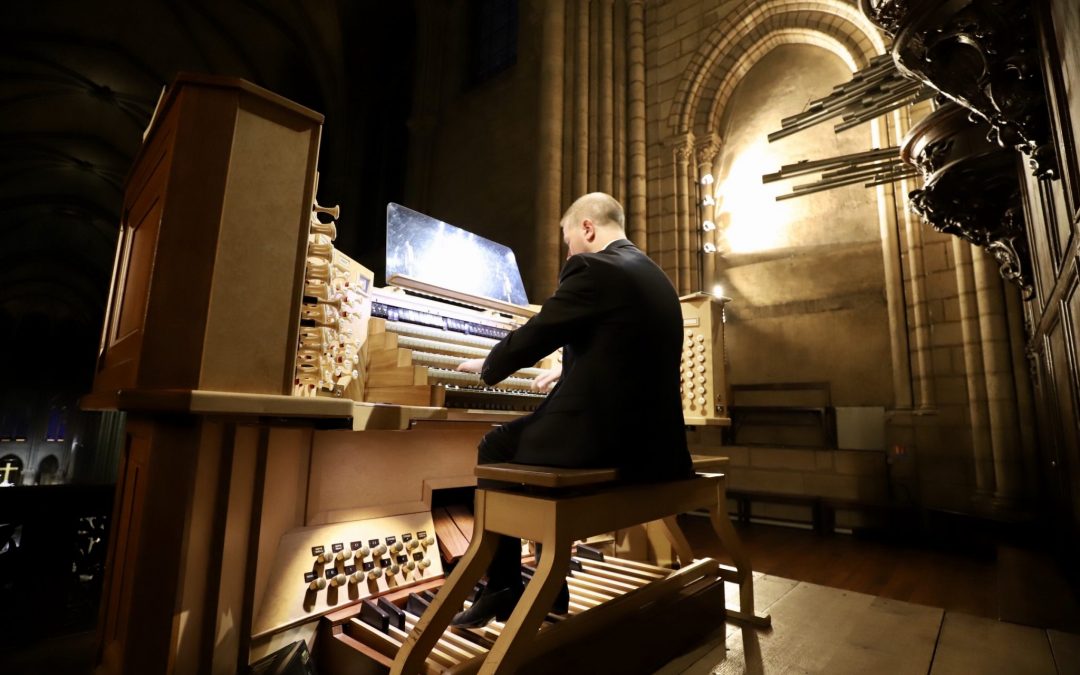 Joahnn Vexo came to San Francisco specifically at the invitation of the French Embassy in the United-States for a unique and free support concert that will take place at Grace Cathedral on Monday, April 29th at 6pm

The symbolism is strong since this episcopal cathedral was largely inspired by the architecture of Notre-Dame de Paris.

Johann Vexo has been practicing his art for more than 15 years in Notre-Dame de Paris. This sadly famous Monday, April 15th, he accompanied the evening mass when the fire broke out in the cathedral and destroyed the roof and part of the building.

We met him between two rehearsals on the heights of Nob Hill and we first wanted to take stock with him on the condition of the two organs of Notre-Dame de Paris, the great organ and the organ of chorus.

You will surely be relieved to know that the great organ has not suffered. Nothing burned, nothing melted, the experts found very small traces of water and a little dust but no soot in the pipes. A good dusting will do the trick, and the organ that has about 8000 pipes will not need to be dismantled; the largest instrument of France will be carefully sealed the time of the cathedral renovation.

The choir organ was somewhat less fortunate. As its name suggests, its location meant that the mechanics and bellows took water from the fire hoses; the pipes are in good condition.
From the pictures taken from inside the building, Johann Vexo tells us that the papers he left on the desk leaving the scene on the night of the fire, are still in place. Is all this a miracle?

We took advantage of his presence to learn more about his career and his job.
He started the music at seven, the organ at fourteen, and did not join to the Nancy Conservatory of Music until after his baccalaureate; he finished his studies at the Conservatory of Paris before joining the team of organists of Notre-Dame de Paris.

During the conversation, we learn that an organist who accompanies a mass improvises … he does not play a piece of music written by a composer, he adjusts his improvisation on the course of the current mass. The scores are only used during the concerts.

We understand too that the cathedral had become a second home because in the course of one sentence, Johann Vexo tells us he had the keys of Notre-Dame de Paris … The explanation is simple: to be able to repeat, he had to work most of the time when the building was empty, that is to say in the evening, or even at night.

So when Johann Vexo tells us that he came to San Francisco to show his attachment to Notre-Dame of Paris, we want to believe it.

The organs are safe but if you want to support the renovation of the building, participate in the fundraising supported by the Consulate of France in San Francisco, and organized by the Friends of Notre-Dame de Paris, foundation of American law (501-c-3), click here.