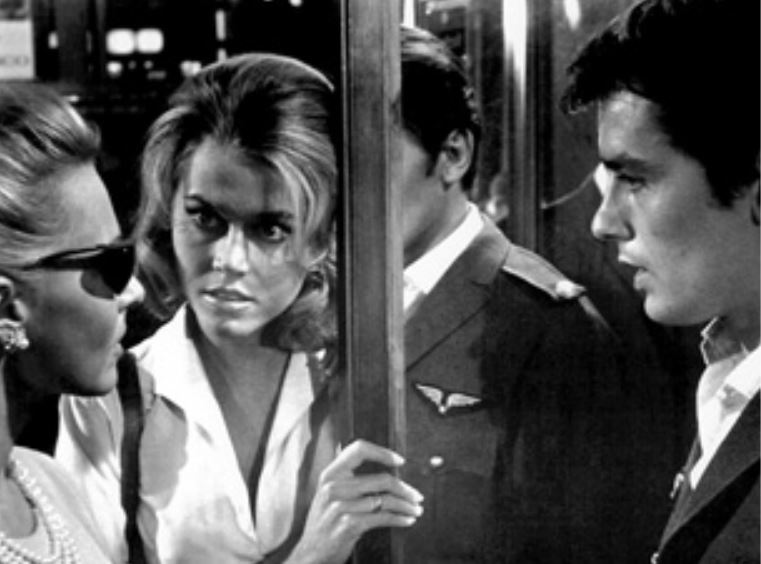 It’s all here in FRENCH 6—taut thrillers, noir-horror hybrids, wide-ranging heist films, thrillers laced with political overtones. Women in distress, femmes fatales, blood feuds, backstabbers, bickering thieves, men haunted by their past: French noir in the sixties is bursting at the seams with dark tales that grab you by the throat and refuse to let you go!

Thursday Nov, 14th
LA CORDE RAIDE [LOVERS ON A TIGHTROPE] A cheating wife (Annie Girardot) is unwittingly drawn into a murder scheme against her suspicious husband (François Perier) by a lover who may be up to something completely different… [1960, 79min]

LA CHAMBRE ARDENTE [THE BURNING COURT] A group of disparate individuals, all with ulterior motives, descend upon a grand French estate owned by an elderly man—an estate rumored to be the site of past episodes of witchcraft and supernatural events. When the owner is murdered, they each get more than they bargained for! Directed by noir master Julien Duvivier. [1962, 110min]

Friday Nov, 15
LES FELINS [JOY HOUSE or THE LOVE CAGE] Lover-boy Alain Delon is on the run, and goes from the frying pan into the fire when he hooks up with two sexy but dangerous ladies (Jane Fonda, Lola Albright) whose hiding place proves to be filled with even greater peril. Directed by René Clément. [1964, 97min]

MALEFICES [HEXES or WHERE THE TRUTH LIES] Juliette Greco is mysterious, fascinating—and quite possibly a witch set on murdering her new lover’s wife. All the sinister action takes place on a remote island with the all-too-appropriate name of…Noirmoutier! Boileau-Narcejac (the source novelists for VERTIGO and DIABOLIQUE) strike again! [1962, 104min]

LE PETIT SOLDAT [THE LITTLE SOLDIER] Jean-Luc Godard mixes love, war, and political treachery in his second film, banned for three years due to its darkly subversive take on the Algerian conflict. Anna Karina, in the full bloom of her 18-year-old beauty, first reveals her Sphinx-like qualities as an unreliable love object. [1960, released 1963, 88min]

LES ABYSSES Noir crashes into the bestial sub-universe of Jean Genet in this harrowing tale of two maids who descend into madness and murder after years of mistreatment by the family employing them. This controversial film was championed by French intellectuals, who forced it to be screened at Cannes (to a tumultuous reception). [1963, 90min]

Saturday Nov, 16 evening
SYMPHONIE POUR UN MASSACRE [SYMPHONY FOR A MASSACRE or THE CORRUPT] A cartel of smugglers whose business is faltering plan a “last big score” only to have a series of betrayals put the entire scheme in jeopardy. Jacques Deray’s beautifully crafted third film was a mega-hit and established him as a leading director in France. [1963, 115 min]

HORACE 62 [THE FABIANI AFFAIR] A shocking tale of a blood feud undertaken by two Corsican families living in Paris. Charles Aznavour and Raymond Pellegrin are electrifying as the reluctant leaders of an altercation that proves tragically unstoppable. [1962, 95min]

Sunday Nov,17 matinee
THÉRÈSE DESQUEYROUX [THÉRÈSE] Georges Franju’s take on the “provincial gothic,” where the lives of women are so grimly stifled that they will even consider poisoning their husbands to escape their emotional enslavement. Emmanuelle Riva is riveting as the wife who longs for a room of her own. [1962, 109min]

CONSTANCE AUX ENFERS [WEB OF FEAR] Michèle Morgan is a lonely widow who witnesses a murder, and who falls in love with the murderer—not knowing that it’s all a “love con.” A slick, twisty thriller set in a very 60s Paris, with Morgan giving us the full range of her consummate facial expressiveness. [1964, 88min]

Sunday Nov 17 evening
MELODIE EN SOUS-SOL [ANY NUMBER CAN WIN] Jean Gabin at last—and with Alain Delon!—in Henri Verneuil’s irresistible heist tale set on the French Riviera, where these two mismatched partners in crime attempt to knock over a swanky casino. Gabin is marvelously crusty; Delon is sullen and dreamy—will they pull off the big score despite their essential incompatibility? [1963, 117min]

LA MORT DE BELLE [THE LAST OF BELLE] Georges Simenon’s roman durs often explore desolate psychological landscapes: here we witness the astonishing impact of suspicion as it eats away at an innocent man (Jean Desailly) hounded by the police after the murder of a beautiful young girl who was renting a room in his house. Desailly’s third-act transformation is utterly astonishing! [1961, 96min]

Monday Nov 18th
LA GUERRE EST FINIE [THE WAR IS OVER] Alain Resnais abandons his usual opaque narrative approach for a meditation on the desperate lives of revolutionaries, seen through the lens of an aging agent (Yves Montand) torn between a desire to give it all up and the passion of an affair with a beautiful young revolutionary (Genevieve Bujold) who urges him to “up the ante” with more violent forms of disorderly acts. [1966, 117min]

OBJECTIF: 500 MILLIONS [OBJECTIVE 500 MILLION] Bruno Cremer plays a haunted veteran of France’s wars (both Indochina and Algeria…) is approached with an airplane heist scheme by a mysterious woman (Marisa Mell) who is fronting for the man who had Cremer put in jail for war crimes. Cremer agrees to the heist, but he can’t decide if he wants the money, the woman, or revenge against the man who betrayed him. “The last classic French film noir” and a shattering collaboration between writer/activist Jorge Semprun and director Pierre Schoendoerffer. [1966, 91min}

Merci Don Malcolm for having brought 101 French Noirs at Roxie Theatre since 2014! You rock!!