Javi Jimenez: from the barrio of Madrid to Barrio Manouche… to Stern Grove 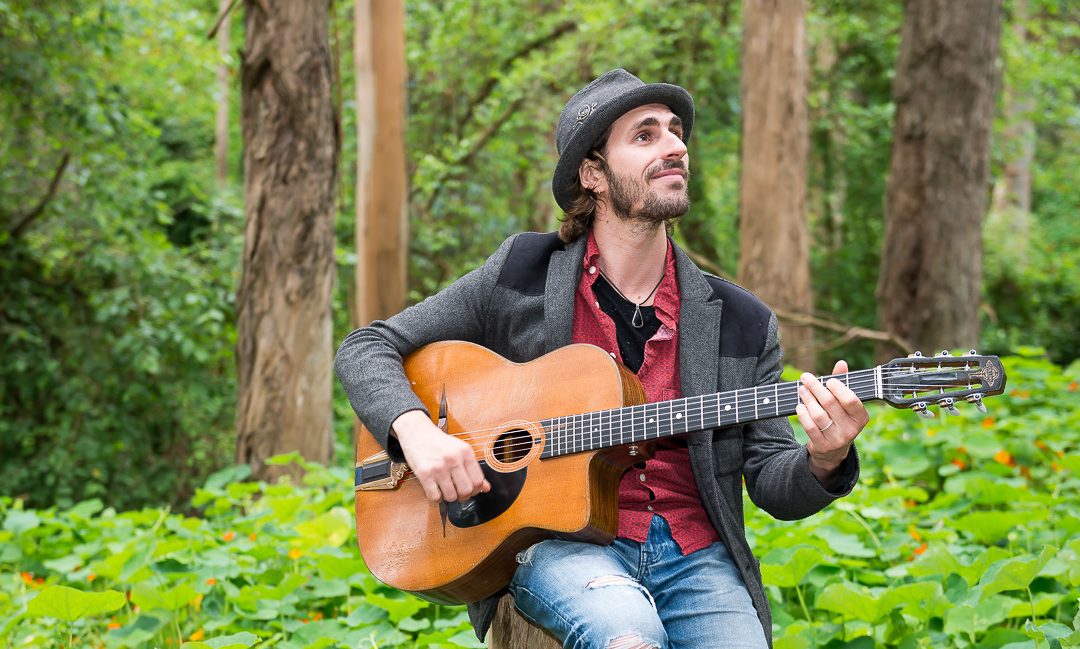 Barrio Manouche is a local band, and like San Francisco, a melting-pot of origins: Spain, France, Quebec, Brazil. They performed at the Stern Grove Festival on Sunday, August 11th opening for Pink Martini. We met their founder, Javi Jimenez; interviewed just by himself, he absolutely wanted to make clear that “his vision is to create a group where everyone has a voice”, he also insisted that we name all the members of the group :

Obviously he does not do this alone, but we wanted to know a little more about him and how he arrived in San Francisco, how he gathered around him these artists to create this band of Gypsy-Jazz / Latin Jazz with a French touch, a nice local band quite famous in our French community.

The beginnings:
Javi Jimenez is mostly self-taught, he started playing with a guitar in Madrid where he was born: he was gifted a guitar for Christmas when he was 12 years old but did not begin to take classical guitar lessons at the cultural center of the district before he was 14 years old, and his first guitar teacher was actually mostly … an accordionist! Even though he has Andalusian roots in the family, no one in his immediate circle was a musician. He continued his practice and switched to the electric guitar at age 17 where he became passionate about rock, Spanish punk rock and played in his first band Ninatax.

The encounter:
He moved to Barcelona at the age of 19 where he continued to study music more seriously at the famous Aula music school (affiliated with the famous Berklee). For 3 years, he studied, among others Coltrane, Dizzy Gillespie, but he felt that he was missing something. He also taught as a day job and played music in the street (and found it very hard but enriching) and then he discovered Django Reinhart and it became his OBSESSION, his “raison d’être”. He is fascinated by the fact that ” Django had turned his limitations into pure genius”.

The exile:
He met Adam Roach, a Californian musician, who introduced him to blues and decided to follow him to Fairfax, California, to explore. He played several gigs in gypsy jazz bands in the region of Auburn, where he met a good community of musicians. He left after a year and finally returned to California quickly at a time when Spain was in crisis. He met his wife in California, Emmeline a lovely French expat, and started Barrio Manouche … then a family. Of course he listens to all the great Flamenco guitarists like Paco de Lucia, Vicente Amigo … and he swears that his daughter is not named Lucia because of Paco. With Cyril Guiraud (the saxophonist of the group) of DoubleOone, they produce Barrio Manouche’s albums themselves in the studio (where you can also attend the recordings).

Now based in San Francisco, his inspiration still remains Django for the most part, but he is also inspired by nature and likes to relax at Golden Gate Park and the ocean … His ambition is to “try and expand the musical vocabulary in a very humble way” by mixing genres and people. Actually, he is not too fond of  the Gypsy Jazz / Flamenco Fusion label, he claims a strong French influence in his compositions, not to mention the Spanish punk years that we can hear for instance in the title El Joven. You recently heard their new single, cover of La Foule. Stay tuned for the release of their next album in October: what a journey from Madrid to opening for Pink Martini at Stern Grove Festival! Bravo!

We love this local band and we hope you will support them too. Olé!