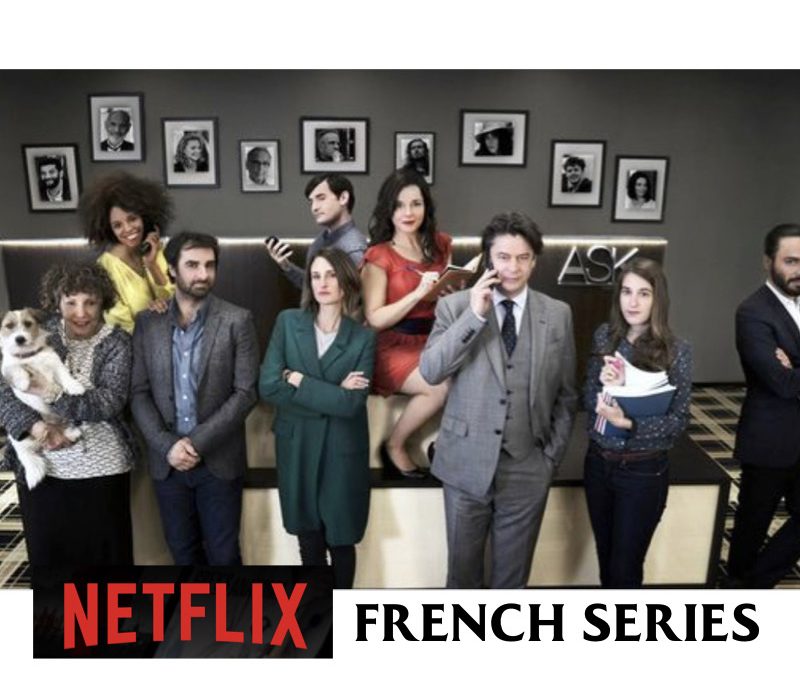 A Very Secret Service (2015) – Serie – 1960: the French intelligence service hires the 23-year-old André Merlaux. Handsome, well raised, intelligent but impressionable, Merlaux has much to learn to serve and defend the interests of France. Three officials must adequately train him to execute delicate and sometimes outlandish operations, as Merlaux discovers the intricacies of government and navigates diplomatic incidents.

Black Spot (2017) – Serie by Mathieu Missoffe – a French-Belgian television thriller that premiered on France 2, following its debut at Festival des créations télévisuelles de Luchon.  A police inspector investigates a string of murders in a town where the murder rate is six times higher than the rest of the country.

Call My Agent (2015) Serie by Florence Herrero – All 3 seasons available – Mixing comedy and drama, the series describes the life of a prestigious talent agency. On each episode, a movie star plays her own role with some self-mockery; From Jean Dujardin to Isabelle Adjani, Marion Cotillard, Monica Bellucci and so may more famous French actors. A classic now!

Criminal France (2019) – Serie – Set within the confines of a police interrogation room, French investigators engage in intense games of psychological cat-and-mouse with their accused suspects to find the answers they need in order to solve their cases. This is a French-language police procedural anthology series created by Kay Smith and Jim Field Smith and starring Nathalie Baye, Jérémie Renier and Sara Giraudeau. Criminal: France is part of Netflix’s Criminal, an anthology series consisting of twelve episodes, with three episodes set in each of four countries, filmed in local languages – France, Spain, Germany and the UK.

Mythomaniac (2019) Serie – Burned out and taken for granted, a working mom suspects her partner is cheating, so to win back his attentions, she feigns a medical diagnosis. Maria Hands

The Bonfire of Destiny (2019) – Serie – Amid a devastating fire in 1897 Paris, three women see their destinies turned upside down by forbidden love, identity theft, betrayal and emancipation. Based on a true event.

The Break (2016) – Belgium Serie – A police detective mourning a painful loss moves back to his hometown, only to be drawn into a murder case that alludes to dark secrets.

The Forest (2019) – Serie – Police investigate after a teenaged girl, Jennifer Lenoir, disappears in a forest in the Ardennes, France, and are assisted by her teacher, who had a traumatic experience in the same forest when she was young.

The Hook up Plan (2018) – Serie – Comedy – Perpetually single Elsa can’t seem to figure out why she is so unlucky in love, and her friends want to rally around her. In a misguided attempt to build up Elsa’s confidence, they hire a male escort — who Elsa knows as schoolteacher Julies — to renew her faith in dating, relationships and finding love. Elsa comes unglued upon discovering that her friends have been hiding big news from her. Longtime friendships reach a boiling point as Elsa wrestles with growing doubts about Jules.

Transfers (2017) Serie –  Five years after drowning in a boating accident, ordinary man Florian Bassot wakes up in policeman Sylvain Bernard’s body, with scientists having found a way to transfer his consciousness. This sci-fi serie won the International Press Jury Award for Best Actor and Best French-Language Series at the Series Mania

Unit 42 (2017) – Belgium Serie – While having to raise his three children on his own, Inspector Sam Leroy joins Brussels’ Cyber Crime Unit. Confronted with new codes, he must collaborate with Billie Vebber, a former hacker who covertly pursues objectives of her own.

Versailles (2015) – Serie – Franco-Canadian historical fiction; In the wake of the Fronde in 1667, the French nobility have begun to defy and disobey the monarchy. Young King Louis XIV (George Blagden) decides to move the court from the Château de Saint-Germain-en-Laye near Paris to his father’s former hunting lodge near the hamlet of Versailles as a means to force their submission. As Louis renovates and expands his new Palace of Versailles, the nobles—displaced from their usual surroundings but compelled to surround the king—become embroiled in increasingly dangerous intrigues.

and in time of French local election… Marseille (2016) Serie – A tale of power, corruption and redemption set against the rich backdrop of the French port city of Marseille. Robert Taro, Marseille’s mayor of 25 years, is opposed by his young, ambitious former protégé. Gérard Depardieu, Benoit Magimel, Nadia Farès, Stephanie Caillard.