Frédéric Jung, General Consul of France in San Francisco, looks back on 2022 and shares 2023 agenda 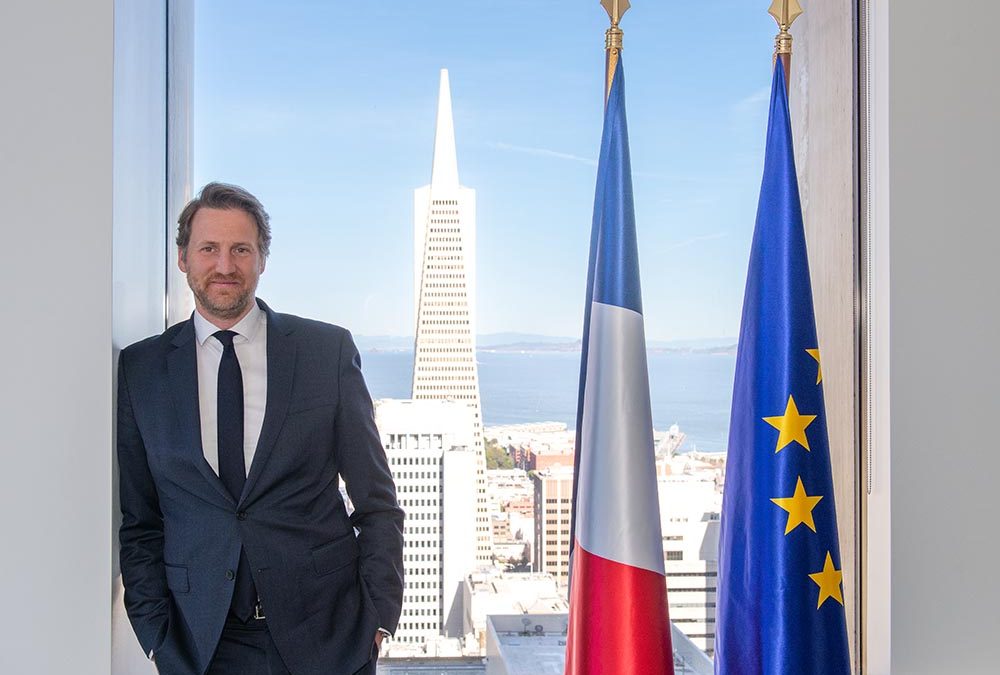 It was hard not to start this interview with Frédéric Jung without talking about the recent unusual weather conditions!

He confirmed that “fortunately, those heavy rains did not have a major impact on our community. However, according to the US weather service, these extreme rain events are expected to happen again. Let’s stay vigilant.“. We are warned…

We were delighted to discover the new offices of the Consulate and we leverage our time to talk about numbers, projects, agenda…

Can you give us an overview of the numbers for the French community in the constituency?

After a decrease in the number of individuals on the register of French citizens living abroad from 30,000 in 2017 to 25,000 at the end of 2021, there has been a global rebound. This same trend has been observed throughout the United States.

We currently have about 27,000 registrants, which makes our community still the second-largest French constituency after New York and the 13th-largest in the world.
And this trend is not over yet. While many people came or returned in 2021, the numbers have continued to grow in 2022.

At this time the employment numbers are more difficult to assess. The Tech industry is currently laying off a lot of people in San Francisco and Seattle, and we are starting to see that some French citizens are being impacted, but it’s still too early to have precise numbers.

As for the people in the restaurant, hotel, and retail sectors, they are hit by the general situation of the Western U.S. cities. To this day, the economy of San Francisco, for example, has not rebounded like that of cities on the East Coast.

And I’ll give you two numbers that I think speak for themselves about San Francisco: the office stock is experiencing a 27% vacancy rate… compared to 4% in 2019. That’s huge. And regardless of current leases, only 40% of the City’s office space is occupied. You can imagine the impact on Downtown business.

It is definitely not the same as it was before the pandemic. Thankfully, San Francisco is once again hosting major conferences that fill hotels and restaurants, so vitality is returning but only episodically.

In 2022, the life of the Consulate was disrupted first by two elections and then by a move. Would you like to tell us a little about this?

“The 2022 elections were indeed a key moment for the Consulate. For a team like ours, with only about 20 agents, organizing these elections is a Herculean task!

With the two ballots – presidential and legislative – we set up a total of 52 polling stations across the whole constituency. This involved picking up pallets of election materials from the San Francisco airport, bringing them back to the Consulate, splitting them up, and shipping them out to each of the polling places in San Francisco, Palo Alto, Berkeley, Sausalito, Sacramento, Portland, Seattle, Salt Lake City, and Honolulu.

I would like to take this opportunity to thank the Consulate’s teams, the Honorary Consuls, as well as some 230 volunteers who made it happen and ensured the smooth running of these elections.

I would like to add that the constituency, which is geographically very large and partially rural, had the highest voter turnout in the United States for the second round of the presidential election.

I would also like to add a word about the Internet voting option, which was made possible by law for the legislative elections. This new voting method was a real success; ¾ of the voters chose it.

The European elections will be the next electoral event for the French of the district. They will be held in the spring of 2024. Given the current legislation, voting will only be possible at the polling stations or by proxy.

As for the move of the Consulate General, it was indeed an intense moment. It took a little longer than anticipated because we had to reconcile the security requirements of the French government with the many California standards and regulations.

We now enjoy an environment that is very much appreciated by French citizens and Consulate staff alike. Welcoming the public is now easier, the waiting room is more spacious and more modern.

We can now better process passport applications: the appointment online interface has been simplified, the number of agents to process applications has been increased, and the good news is that it is now possible to pick up one’s passport every weekday morning without an appointment.

For the French citizens residing in the other states of the constituency, we will more than ever increase the number of consular visits. It is essential for us to be as close as possible to our community on a very regular basis, according to our resources of course.

I am regularly asked about the possibility of applying for a passport electronically. I would like to make a few important clarifications on this subject. It is of course an exciting perspective, especially in a constituency as large as ours, but unfortunately, it is not possible any time soon. The announced experimentation in Canada and Portugal has not yet started. It is expected to start in the spring of 2023. The pilot will take several months to evaluate whether the project is successful and whether the Ministry of the Interior can consider extending it. Also, this procedure will be based on a secure video-conference appointment and will only be available to adults who are on the registry and are renewing their passports. The challenge is, of course, to meet the highest standards in the fight against fraud. We will have to be patient before this procedure becomes a reality for us”.

Jean-Noël Barrot, the Minister Delegate in charge of Digital Transition and Telecommunications, was in the San Francisco Bay Area after CES. Can you tell us a few words about this visit?

“We were delighted to welcome Jean-Noël Barrot. We didn’t have a ministerial visit to the Bay Area since March 2020.

These few days enabled him to meet with various Tech players, such as Elon Musk, with whom he discussed the new European legislation, voted in 2022 at the European Commission: the DSA and the DMA.

These texts will bring better regulations regarding content moderation, for the Digital Service Act, and fairer competition for the Digital Market Act. We mentioned these projects in 2022 when France was chairing the EU Council.

A bit like the General Data Protection Regulation (GDPR), we hope that the DSA and the DMA adopted by the European Union will be replicated on this side of the Atlantic.

Such a visit also allows us to show the Silicon Valley ecosystem that France is establishing itself as a nation of innovation; Our country now has 29 unicorns and has thus largely surpassed the goal, set in 2019, of 25 unicorns by 2025.

Jean-Noël Barrot also came with a delegation of startups from Paris, that accompanied him to CES and then to San Francisco, where a meeting with VCs from Silicon Valley was organized, with the complicity of Romain Serman for the BPI and Reza Malekzadeh for the French Tech San Francisco.

During a meeting with the Bay Area’s French Tech entrepreneurs, the Minister was finally able to meet some of our French startups that have successfully established themselves in the United States such as Loft Orbital, DNA Script and others.”

Is French language teaching still a major focus in 2023?

Beyond this first circle, we also have labeled schools, such as the Francophone Charter School in Oakland. It is this second circle of public schools offering French immersion or teaching programs that we want to strengthen.
The goal is to support the development of bilingualism in the United States through dialogue with schools and local education authorities. This is the spirit of the “French for All” initiative announced by President Emmanuel Macron during his recent visit to New Orleans. In this regard, Utah, which has the largest number of French language learners in the United States, is a model.

In the San Francisco Bay Area, we are also preparing the program for the Francophonie month, next March, and we will be sure to keep you updated on the details.

What are the major cultural events we can already talk about for the beginning of the year?

I am also pleased to announce that the Night of Ideas will finally return to its original successful format, with thousands of participants who will be able to gather at the Public Library in San Francisco on March 4th, 2023 to exchange, debate and dream! This will once again be a key moment in San Francisco’s cultural season.