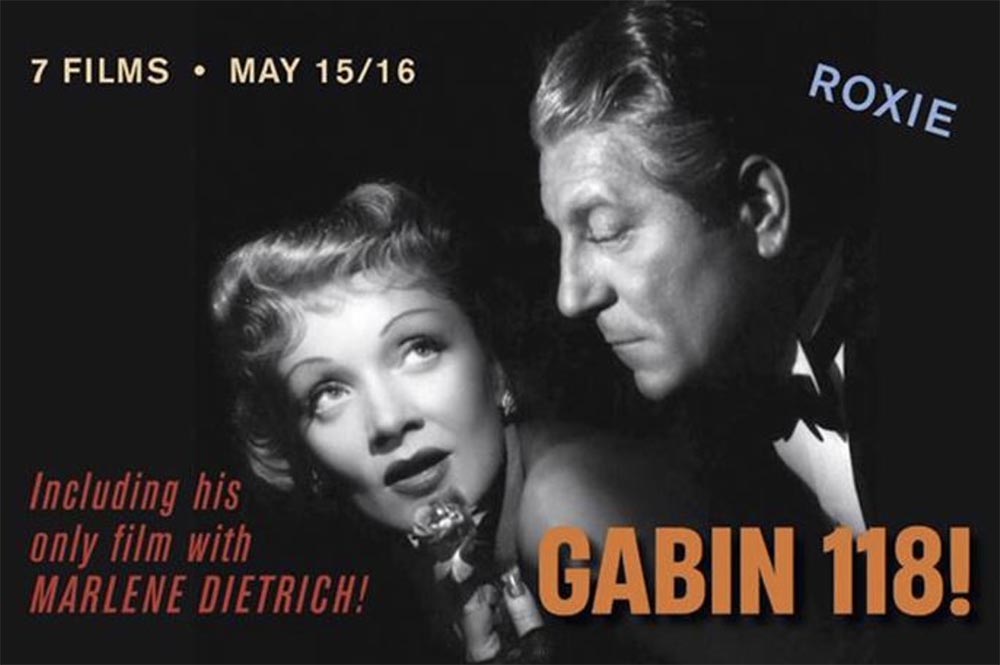 Midcentury Productions presents GABIN 118, in tribute to French film legend Jean Gabin, with screenings of seven films starring Gabin, at the Roxie Theatre in San Francisco, on Sunday & Monday, May 15-16, 2022.

Jean Gabin has been an anchor and a touchstone in world cinema for almost a century, but only a handful of his films are really known—even to ardent cinephiles. Don Malcolm’s Midcentury Productions has been working hard at changing that, beginning in 2014 with its first foray into the “lost continent” of French film noir, THE FRENCH HAD A NAME FOR IT, a yearly series still ongoing at San Francisco’s Roxie Theater.

The two-day, seven-film series, entitled GABIN 118 (Gabin was born on May 17, 1904) will open with a triple bill matinee on Sunday May 15, and will follow with evening double features that night, and again on Monday May 16. It’s a wide-ranging look at Gabin’s singular film presence, with films from the 30s to the 60s, including his only film with Marlene Dietrich, with whom he was romantically involved during World War II but whose romance came to a bittersweet end shortly after they worked together.

“These two films—STORMY WATERS and PEOPLE OF NO IMPORTANCE—are deeply engaged with the complex essence of Gabin’s acting style and his search for complex characters who can be portrayed with his unique brand of deceptive naturalism,” Don notes.
In both films, Gabin is a married man engaging in an affair with a younger woman, but from there all the circumstances (and all the character colorations) are different. “A sea captain and a trucker—men who choose solitude for their profession but who somehow wind up embroiled in complicated situations despite themselves—Gabin excels at roles combining strength and vulnerability, and despite the relative obscurity of these two films, these are two of his greatest performances,” Don enthuses.

Tickets and passes are on sale on April 18 at roxie.com

Is Decathlon more like a Marathon?
House of Cardin, a great documentary about an iconic designer
How a French Petit Pot de Crème redefines America’s sweet tooth
Transferring and protecting your estate, and your family
French Movies on HULU in April 2020
Cine club and workshops for teenagers thanks to Ronald Chase non profit