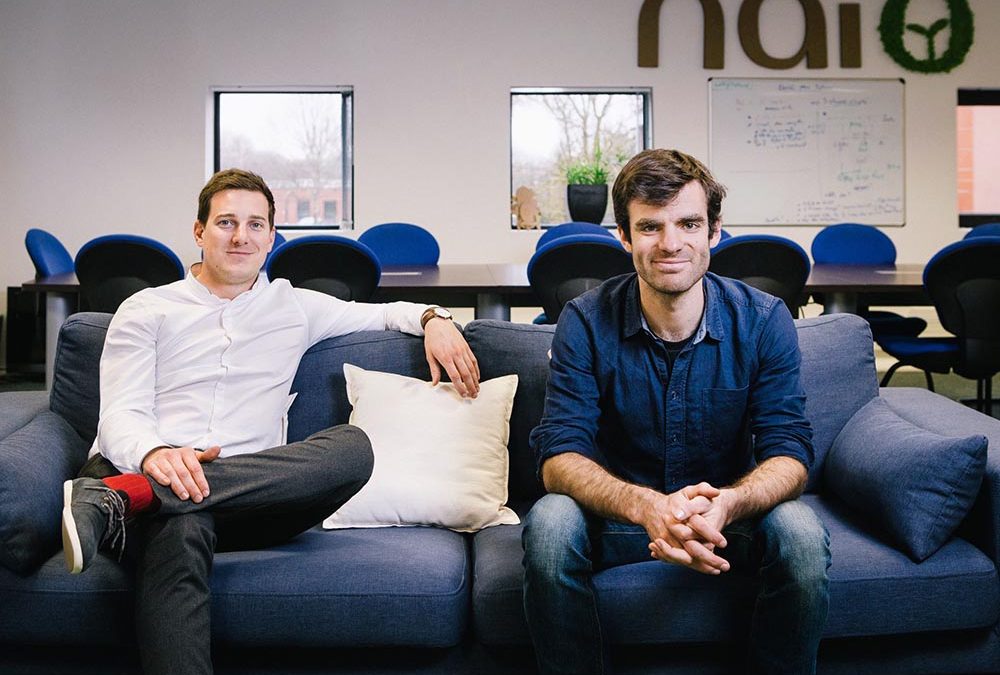 Using robotics in agriculture is no longer science fiction. We saw it at the Consumer Electronics Show (CES) in Las Vegas, and the business press confirms—it’s real.

Whether it is to compensate for the lack of workforce or allow agriculture to be more respectful of the soil and more ecological, the adoption of robotics in this sector is on its way.

To better understand the ins and outs, we met Gaëtan Séverac, one of the two co-founders of Naio Technologies. This French company designs and produces agricultural robots in 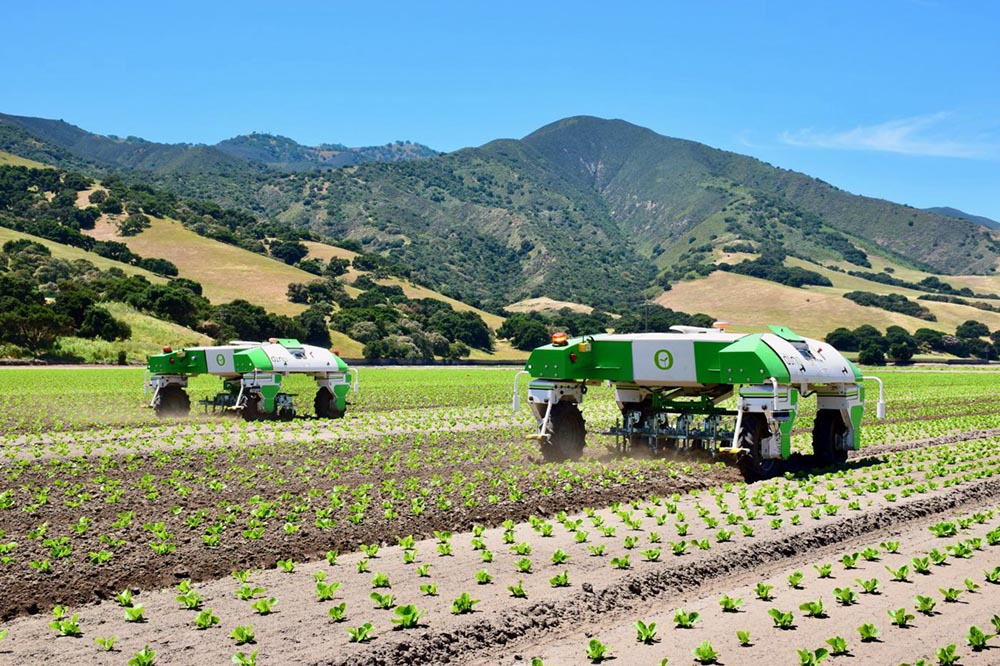 Naio, which celebrated its tenth anniversary, now employs 70 people, including ten in California.

According to the California Department of Food and Agriculture (CDFA), in 2020, more than a third of the vegetables and two-thirds of the fruits consumed in the United States were grown in the Golden State.

OZ a weeding robot, which is particularly suited to commercial gardening, naturally found its place in the Salinas region. Those who drove along Highway 1 towards Monterey could see the immense expanses of land planted with strawberries, beets, artichokes, salads, and others.

The idea of ​​the robotic weeder did not germinate in the minds of our robotics engineers while sightseeing, but rather while discussing with farmers who explained that they could no longer find people to weed the crops by hand. These days people prefer to do something else than weeding in the fields. It is thankless and painful work.

Moreover, chemical weedkillers no longer meet the current ecological criteria of either consumers or producers.

As Gaëtan Séverac tells us: “Modern agricultural practices have shown their limits in terms of environmental sustainability. To lean towards sustainability and resilience, we must return to agriculture with fewer chemicals and a broader array of cultures. This diversity requires more work, is more complex, and can only be possible with comprehensive automation. Covid and local policies have recently exacerbated the phenomenon, but this was already a trend“.

Naio Technologies marketed its first robot in 2013 and today has nearly 250 machines at work around the world.

Starting with a small robot focusing on large-scale gardening called OZ, they moved on to a larger Dino model. The latter can cover up to 10 acres per day while working 8 to 10 hours in a row in complete autonomy. The work surface is marked out (think robot vacuum cleaner and sensors), and when the robot is operating, “monitoring” is done remotely from an app.

Building on its success in the fields, Naio Technologies is launching a robot for working the vines this Spring. 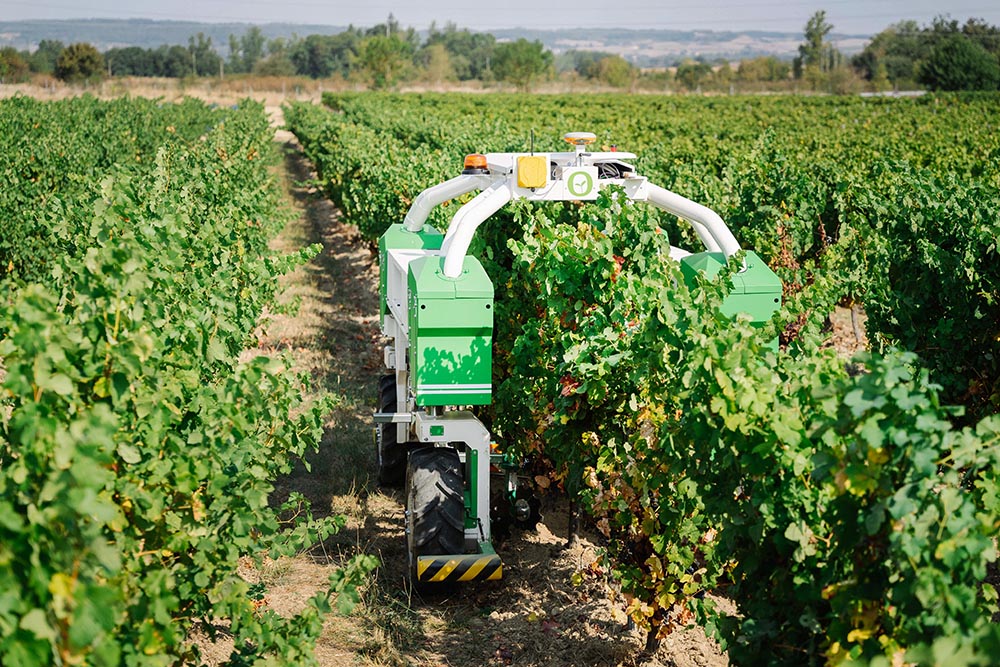 Those who wander in the wine regions have seen these machines that span the rows of vines to treat or work the soil. Until now, these funny tractors required a driver. With Ted the robot, it’s over. It will do the work autonomously for 8 hours a day. The company even promises a tracked version for rough terrain and steep slopes.

It is tempting to compare agricultural robots to autonomous cars, which remain at the stage of technological demonstrators. But Gaëtan Séverac reassures us about the reliability of his robot’s autonomous navigation by declaring that “the robot is not likely to leave the field or stop at the slightest obstacle”. He recalls that “the environment in which robots evolve is much simpler than the roads where cars will evolve.“

But he adds, “The real issues remain centered around logistics. For the moment, the machines have to be brought in every evening, which impacts the organization of the farm operations. Eventually, we are considering mobile charging stations so that the robots can be recharged on-site and work longer, including at night…“

The next question that comes to mind is the affordability of these machines.

In the same way that the co-founders had surveyed the market about the most thankless and repetitive tasks before designing their first robot, they also concocted their business model by exchanging with farmers.

OZ, the robot for commercial gardening, costs around $30,000, and Dino costs between $200,000 and $300,000, but the company offers two alternatives: either selling the robots or renting them to farmers!

When rented, the robot arrives with a technician who starts it on the surface to be cultivated, and voila… The farmer, the wine-grower, takes care of nothing, neither recharging the batteries nor maintenance—this is an ultra-flexible solution for testing the robot’s productivity and the quality of its work.

Naio Technologies seems to have a bright future ahead of it while its robots are weeding, hoeing, sowing, and digging furrows. Hopefully, this will lead farmers to farm greener and allow their workers to focus on value-added tasks that robots cannot complete.

We want to thank the French-American Chamber of Commerce of San Francisco who told us about Naio Technologies. We want to point out that the company, as part of its development, is recruiting in the San Francisco Bay and beyond. Do not hesitate to send your CV to thibaud.m@naio-technologies.com.

If you would like to meet the team, they will present their robots at the WorldAgExpo from February 8 to 10, 2022. Naio’s robots are among the Top-10 New Products of this show. Previously, they had been shortlisted for the CES Innovations awards.

"Take a Hike 2021" with San Mateo County Parks Department
Preparing your retirement in the US
Cote Ouest, the new French Bistro in Cow Hollow
Contest for Teenage Journalists: The Colors of the World
Oakland/Saint-Denis project, a different way to apprehend suburbs urbanization
Covid 19 - Ten questions to Romain Pirracchio, Chief of Anesthesia Dept at Zuckerberg Hospital and P...