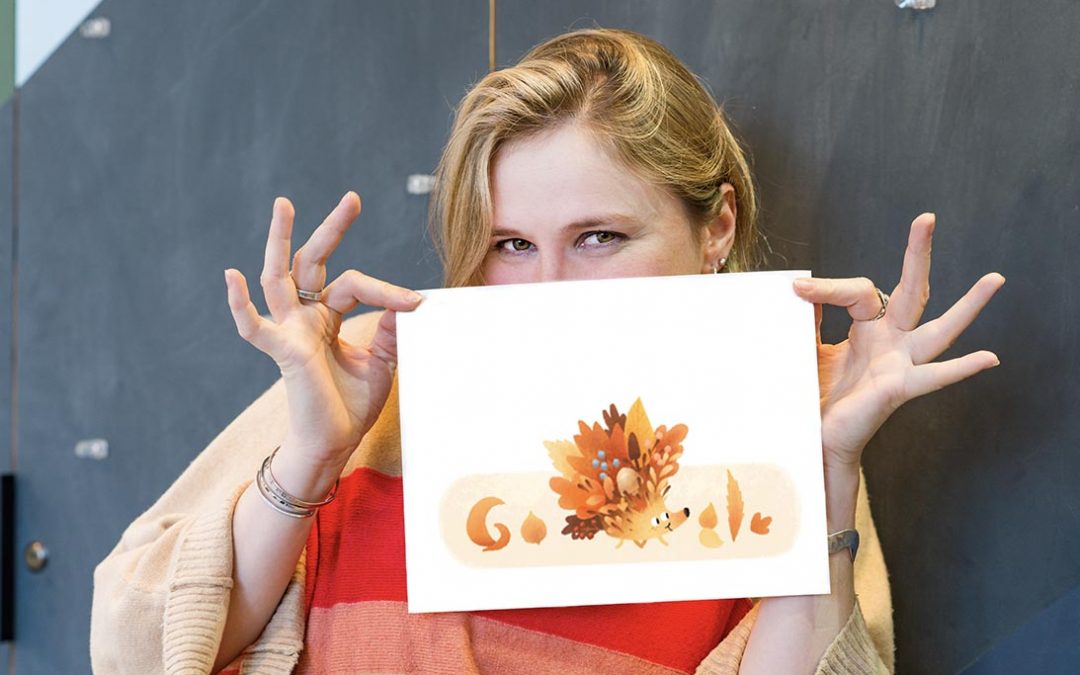 September 22, 2021 – It’s Fall today! You probably spotted this cute Fall Hedgehog throughout your global Google searches today. It was created by Hélène Leroux, a French Google Doodle Team designer based in San Francisco. Happy Fall Day with this International Hedgehog!

We had met Hélène in 2020 but we thought it appropriate to celebrate this first day of Fall 2021 with her. We invite you to (re)read her story and profile and learn a bit about the Google Doodle.

February 2020 – Let’s look at Hélène Leroux and her VR project within the Google Doodle team.

If you are among the regular users of Google Search, you have probably enjoyed a Google Doodle… It’s a small drawing that sometimes replaces the Google logo, and that is displayed at the time of an event, to celebrate an anniversary, or to pay tribute to an important figure in history …

Used for the first time in 1998 when Larry Page and Sergey Brin decided to attend Burning Man, Google Doodle had temporarily replaced the logo of their start-up with a drawing of “The Burning Man” … a graphical and humorous way to report a leave of absence.

But did you know that it took almost two years to see a second Doodle and that it was done for Bastille Day? Thank you, Mr Page and Mr Brin, for having illustrated the Franco-American friendship with this second doodle.

Almost 20 years later, France is still in the spotlight within the Google Doodle team. It is proudly represented by a talented young woman, Hélène Leroux, whom we met recently.

Educated at Penningen, school of graphic arts and design in Paris and Les Gobelins, specialized in animation cinema, Hélène finished her training at Cal Arts in Los Angeles. With multiple diplomas in hand, she joined AKA studios, and then Google Doodle to become a full-time “Doodler” as they are called.

Two years after arriving in the inner circle of Doodlers, she had the opportunity to participate in the only VR doodle project ever made to date. Steeped in French culture and passionate about animation, she wanted to pay tribute to Georges Meliès, often considered as the father of French cinema.

Hélène Leroux co-realized the project within the Google team in just over six months with the collaboration of Cinémathèque Française and Nexus Studios.

She considers herself a storyteller and tells us that “what I like with this job is that it gives me a lot of artistic freedom, and allows me to collaborate with great external partners”.

Discover the video that was made to summarize this larger-than-life project.