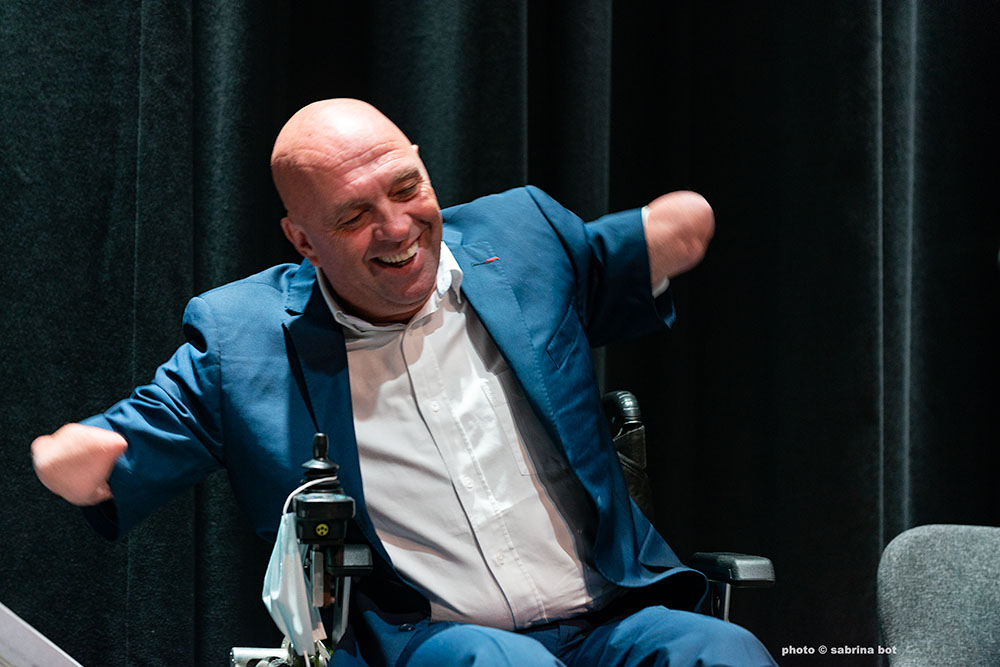 You have surely heard of this very unique French adventurer. To his credit, a series of quite impressive achievements such as swimming across the Channel or the Bering Strait, participating in the Dakar Rallye as a driver… and many more.

For Croizon, it’s not what he has accomplished that is exceptional; it’s how he did it—without arms or legs.

He kicks off the conversation by stating “I died on March 5, 1994! My life ended that day. Then another started… ” On that day, Croizon was electrocuted by a power line which led to the removal of his limbs. 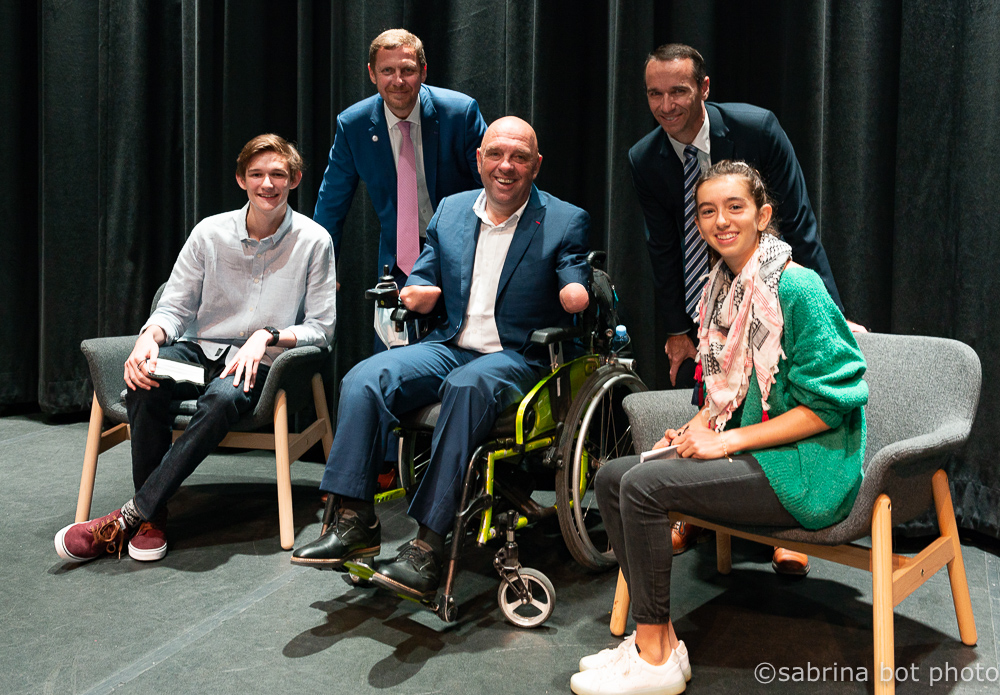 And it is this new life that he talks about today in front of audiences dumbfounded, moved to tears, and literally stunned by so much resilience.

The impossible is yourself – Dare to ask!

Philippe Croizon set himself the ultimate challenge: to go into space, to be part of a SpaceX flight and on the occasion of his trip to Florida he made a little detour to come and speak in front of the students of the Lycée Français de San Francisco (LFSF).

He explains in full humility and always with a smile in the corner of his eye. 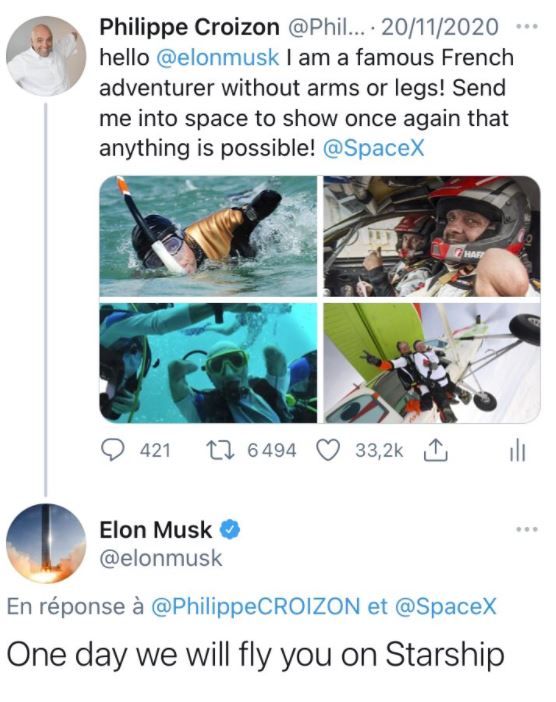 The SpaceX idea came to him about a year ago. He sent a message from his Twitter account saying “Friends, if I reach the 50K followers before Christmas, I appeal to Elon Musk so that he sends me into space.” Not only did his tweet generate the expected followers in less than an hour, but the dream is no longer a dream.

He is still amazed to have received a response from Elon Musk saying “Someday we’ll take you on a Starship flight.”

Philippe Croizon was in San Francisco but it was only a stopover before going to Cape Canaveral.

There, he will follow live with the teams of the mission, the manned space flight of the Starship capsule. This mission called Inspiration 4, will take off on Wednesday, September 15, with four passengers trained for the circumstance but all-civilian for a three-day flight into space.

Now that the adventure has begun, Croizon tells us about the first obstacle to overcome: learning English. He admits that he was not the most diligent student in his class and that academic excellence has never been his forte. Yet for the past six months, he has been taking daily English lessons and is starting to understand Shakespeare’s language reasonably well.

How to doubt that he doesn’t make it when you discover that when he began his training to cross the Channel, he couldn’t swim. He sank like an anvil to the bottom of the pool during his first lesson.

It took him two years of intensive training at a rate of 35 hours of swimming per week, surrounded by a team of professionals, helping him to succeed. So, learning English … should be “easy.” He helps himself in this task as in many others, by practicing relaxation therapy and self-hypnosis.

But he also places great emphasis on the three pillars that have shaped the engine of his success and still hold him today.

First, his family and friends helped him start his new life, and become independent. Philippe Croizon drives, walks with prostheses, and manages himself in many of the daily activities.

He also mentions the use of humor as a tool for resilience. He does not hesitate to use black humor … And as proof, he has published an autobiographical book entitled “Pas de Bras, Pas de Chocolat” in French that could translate into “No pain, no Gain.” 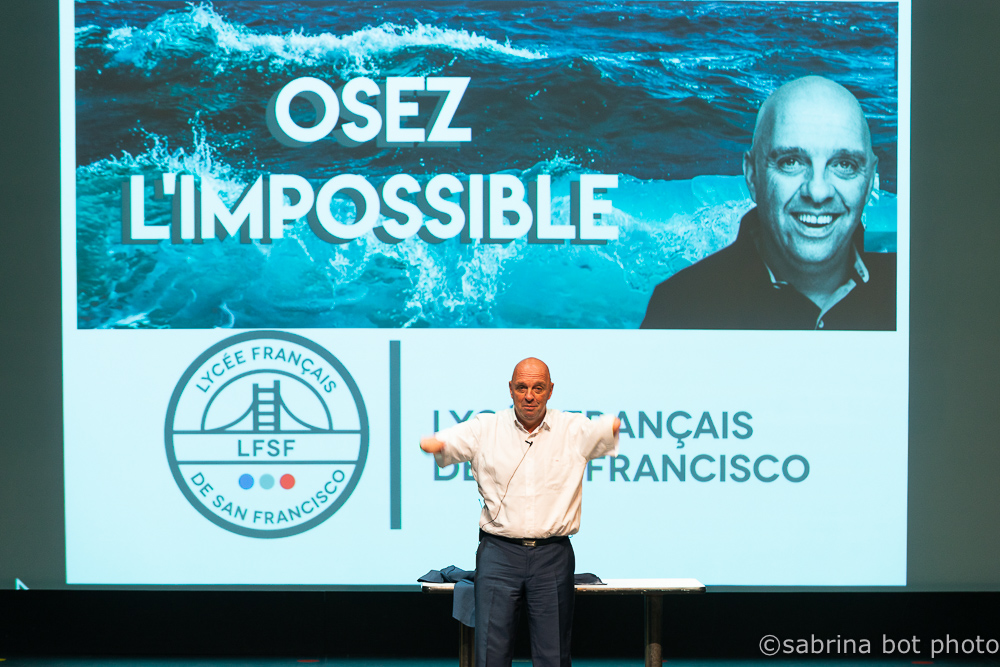 Finally, he says that what saved him was sport. Indeed, the first seven years after his accident, he admits to having stayed on his sofa watching television and to have completely withdrawn into himself… When he started to learn to swim, he was 55 lb more than now.

He believes he has gone from being “a person with a disability to a person who does extraordinary things otherwise through sport.”

An unparalleled sense of sharing to advance the cause of disability

Croizon could be satisfied with his own successes but this man likes to share. He is delighted that his achievements are improving research and thereby the lives of many people with disabilities.

“For example, to go into space, you have to find a solution to the problem of gravity. Without a hand, it’s impossible for me to hang on, I will need at least one prosthesis that will allow me to hold onto something during the flight. I hope that with the direct or indirect help of Elon Musk, we will find a solution and that it will advance research on the subject. ” He adds that the prostheses that were developed for his crossing of the Channel are now used by a large number of people with handicaps.

It is also in this spirit of sharing that Croizon established the Philippe Croizon Academy in Vichy where four young swimmers train in the run-up to the 2024 Paralympic Games.

Regarding the space challenge, Philippe Croizon has no date at this stage. His trip to Cape Canaveral will allow him to speak with the teams on-site and better assess the situation. As he says, “I’m afraid of this new challenge, but it’s too late! It will be hard and violent, but I know from experience that success comes with effort.”

Alcohol free wine is not impossible, it’s here!
Best looking breads - And the winners are...
Has Artificial Intelligence reached a milestone with ChatGPT?
Kids at home - Time to get even more organized!
French Cinema: Lost Illusions by Xavier Giannoli (EN Subtitles)
Convert a CDC vaccination card into a Pass Sanitaire in France