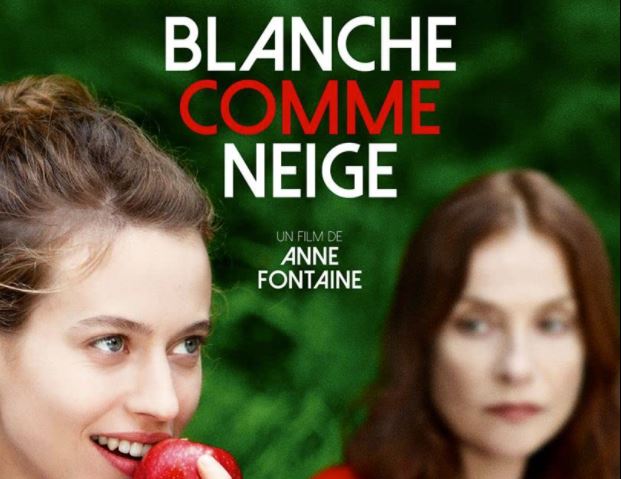 White as Snow, an Anne Fontaine drama with Isabelle Huppert, Benoit Poolvorde, and the rising talent Lou de Laâge. Beware, this is not a movie for kids, not a remake of Snow White (Rated PG-17 for adult themes).

“The tale is transplanted to today’s setting; there are cars and mobile phones, but it still is a tale, with its arbitrary narration and its (false?) innocence.

And the characters have aged some… Snow White has gone from girl to young woman, and the dwarves, while retaining a special bond between themselves, are no longer living under the same roof. As for the evil queen, I tried to make her less of a monster—just a woman who won’t grow old gracefully, because our contemporary society gives us all the reasons not to grow old gracefully.

It then felt logical to materialize the implicit tensions that make the fairy tale so lasting and powerful—primarily the sexual tensions. Snow White is both the healer and the healed one. She is attracted to all these men around her, as well as amused by these doomed bachelors, or, rather, bachelors married to their painful neuroses. While she discovers her own seducing powers, she morphs from princess to queen, queen of hearts of course, and from queen to woman—a path the older queen can no longer retrace…”.

Movie In French with English Subtitles

French Movie - Who You Think I Am with Juliette Binoche (EN subtitles)
No Limit by Challenge: Start-up and Innovation Summit
Visit Carnavalet, the museum dedicated to Paris history (in FR)
Stern Grove Festival 2022, Join and Celebrate the 85th Edition
Play in French - Les Vibrants by Aida Asgharzadeh at TLF
Enjoy le Marché Pop-Up and shop French brands for 3 days only