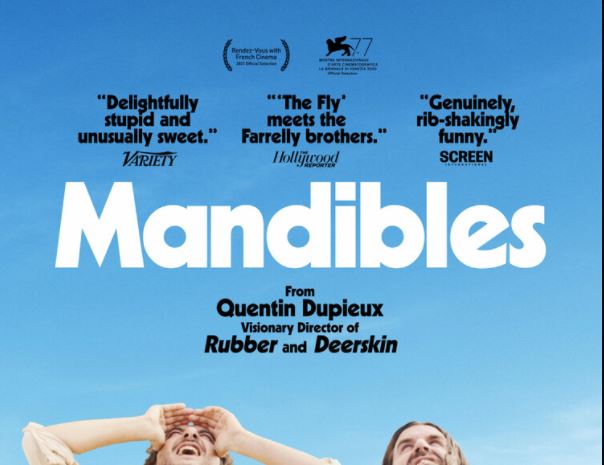 After stealing a beat-up Mercedes in order to deliver a mysterious briefcase to an unknown recipient, the friends find more than they bargained for when they hear a buzzing, thumping noise coming from the trunk of the car. When they open it, they find a gigantic fly trapped inside. Manu and Jean-Gab decide to forgo their current mission and instead focus on training the fly to carry out robberies for them, in the hope of making a ton of cash. A hilarious mash-up of buddy comedy and road movie, with a sci-fi twist, MANDIBLES is a wild and surreal film about friendship, big dreams, and bigger disasters.

“As I finished editing DEERSKIN, I realized that all my films are comedies profoundly tormented by death. My work will always be permeated by the same obsessions, the same “signature”, the same sense of humor. From the beginning, I felt I was ploughing a furrow that was entirely my own: deformed realities, infinitely twisted human relationships, surrealist portraits of our society, profound and childish fantasies…With MANDIBLES, which fits the furrow perfectly, I’m finally abandoning death to focus on life.

In MANDIBLES, I want to glorify the comic duo Grégoire Ludig and David Marsais, for whom I wrote it, by filming their complicity and playfulness with absolute benevolence. MANDIBLES is above all a genuine and sincere comedy about friendship. It’s also, thanks to the presence of a giant fly at the heart of the story, a fantasy film.”