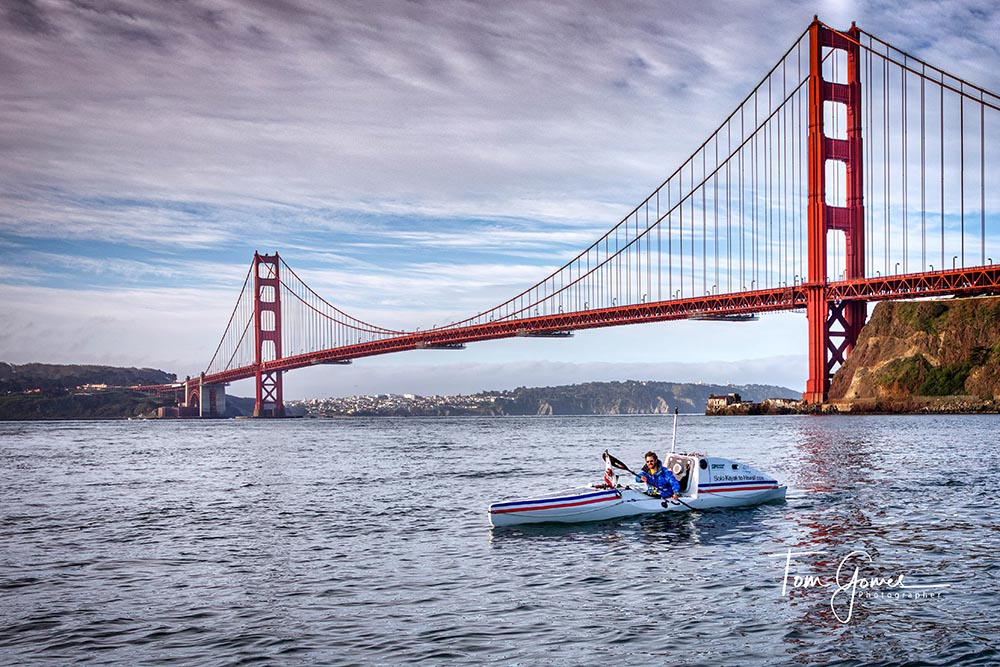 (Article updated on May 27th, 2021) Crossing the Pacific in a kayak between San Francisco and Hawaii -alone and without assistance is the new challenge that Cyril Derreumaux, a Frenchman is about to start.

We told you about Cyril Derreumaux when he descended the Bay in one day and crossed the 7 bridges. He was already talking about his plan to cross the Pacific back then … and here we are 15 days before departure !!

Originally, Derreumaux was to start this crossing on May 31, 2020, but the pandemic decided otherwise. It is now on May 31, 2021, that he will take his place aboard Valentine, his fully custom-designed kayak, for a crossing scheduled to last 70 days between San Francisco and Hawaii. This represents 2,100 nautical miles (or just over 3,000 km) but depending on the downwind and currents, the route will eventually be a bit longer.

The departure is scheduled at 5 a.m. in order to benefit from the best winds and the best tides. As he suspects you won’t attend, an event is planned on May 30th in Sausalito at the Sea Trek pontoon (2100 Bridgeway, Sausalito), to wish him a safe journey.

How did he get the idea for this challenge?

Derreumaux was inspired by the legendary Ed Gillet who made the first crossing between California and Hawaii on a kayak in 1987. Even if his kayak was embellished with a kite-type sail, Ed Gillet’s crossing remains legendary because there was neither GPS nor satellite connection at the time.

He has recounted his adventure in a book called “The Pacific Alone“, and Derreumaux admits to having it as his bedside book. The Frenchman contacted him to ask him “permission to reproduce his adventure“, to which Ed Gillet replied that he did not have to give him any permission! But he very probably appreciated the gesture because he mentioned that he would try to be in Hawaii to welcome Cyril on his arrival …

Cyril specifies that “the paddling crossings are, even if they remain extraordinary adventures, more frequent than the kayak crossings. There were more than 700 but only eight in a kayak, of which only 4 in a solo mode without assistance“.

This kayak, named Valentine after his sister, was entirely designed and custom-made by the Englishman Rob Feloy who had previously built a boat for Peter Bray on his crossing from Canada to Ireland.

Rob who was retired when Cyril approached him, finally let himself be convinced by the French sailor. So he built a unique boat with a completely customized design, of which you can see all the details in 3D here https://solokayaktohawaii.com/3d/

And coming back to Ed Gillet, Cyril explains that his book Pacific Alone was a real source of inspiration. Indeed, Ed Gillet says that at the end of his crossing, he had atrophied leg muscles.

As the kayak is only 25 cm above the water, the kayaker can never stand up … it is too easy to throw off.

Cyril decided to integrate a pedal system so that he could use his legs for 70 days and avoid losing too much muscle. This will also allow him to gain hours of navigation: he will be able to pedal during meal breaks for example. He calculated that this would save him between 10 and 15 days of navigation!! The addition of this “pedal” attracts criticism from some purists, but he fully accepts this decision, and specifies that “after all it’s my adventure, I decide how I want to run it!”

Preparation and details of the expedition

A crossing like this is prepared months in advance, even years.

With his experience of rowing as a team (you will find the list of his previous races on his website), he started to prepare on his own and then called on various friends and experts, like a doctor, a coach, a mental trainer … And as he will be alone at sea and without any assistance, he had to learn to know the operation of the onboard equipment such as the electrical box of his kayak, the watermaker … in order to be able to repair in the event of a problem.

His daily routine appears so simple and easy when he describes it: “As soon as the sun rises, I have breakfast, I sail for three or four hours, I have lunch, I can also take a one hour break, sleep in the cabin then continue sailing until nightfall “. Cyril has decided to play it safe, which means that as soon as night falls, he will return to the cabin.

Cyril is undoubtedly an adventurer but he knows his limits and does not want to risk his life at all costs. His lifeline, his daily contact on land is called Dave, and Derreumaux to specify: “someone calm but not too close at the personal level in order to avoid overly emotional reactions”.

Dave has never made a crossing but will be in contact with specialists such as Lia Ditton, Rick Leah, Thiago Silva, Tez Steinberg for any technical advice concerning the trajectory, the strategy…

Dave will be the only one who can decide to stop the expedition and send the coast guard if necessary according to three criteria: the weather, the state of the boat, and the state of the navigator.

You can follow Cyril Derreumaux‘s adventures on a daily basis, he is equipped with a tracker. To follow him on the map which will be updated every hour, click here 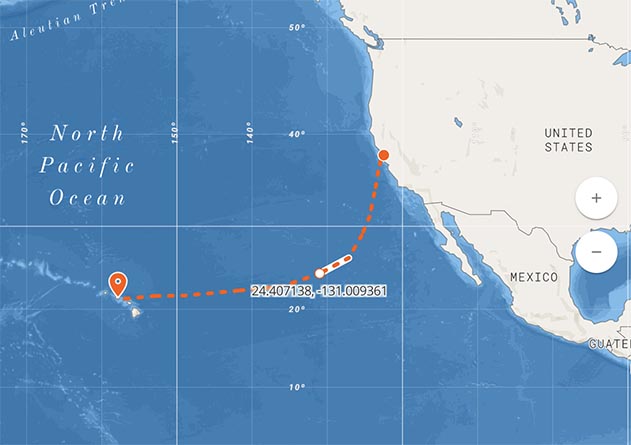 Arrival in Hawaii between August 5 and 10 …

This project was made possible thanks to sponsors that Derreumaux managed to convince by his stubbornness but also by committing his own savings.

He can therefore count on

Confinement or not, the real estate market is resisting
Cinessance, the New Streaming Platform for French Movies
2020-21 Season: Finding Raclette in San Francisco and beyond?
French Cinema: Lost Illusions by Xavier Giannoli (EN Subtitles)
Santa Cruz, so far, so close - Perfect escape for a few days...
Energy Observer, the challenge of sailing with zero carbon footprint