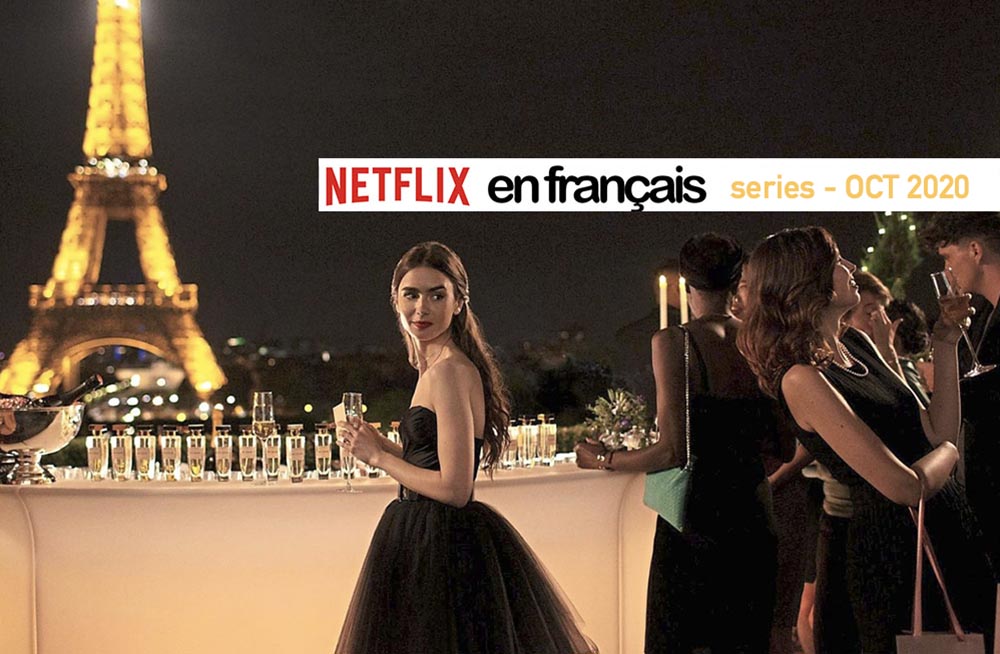 Emily in Paris (2020) – an American series created by Darren Star (Sex in the City) that premiered on October 2, 2020, on Netflix. Emily is an American woman moving to Paris for a job opportunity. There she struggles to achieve success in the workplace while searching for love and experiencing incidents when her Midwestern sensibilities (she is from Chicago) clash with Parisian culture. Full of clichés but entertaining.

Ad Vitam (2018) Sci-Fi – In an age of medical technology that allows people to live forever young, a cop and a rebellious 20-something investigate a mass suicide of seven teenagers.

Grizzy and the Lemmings  (2015) – Animated Series for kids – Set in the distant future, a 7-feet tall grizzly bear named Grizzy, has broken into a park ranger’s home, finding himself contending with a group of trouble-making lemmings in a forest in Canada. In the cabin he does not do anything except sleeping on Sofa , watching TV or eating.

H – (2002) – H is a French sitcom with seventy-one 22-minute episodes. It ran from 24 October 1998 to 20 April 2002 on Canal+. The lives of the carelessly incompetent medical team at a hospital in the Parisian suburbs explode in surreal humor as they go about their daily duties.The title “H” comes from the three words that characterize the series: Humour, Histoire et Hôpital (Humour, Story and Hospital).

Inhuman Ressources (aka Derapages) – Alain Delambre (Eric Cantona), unemployed, and 57 is lured by an attractive job opening. But things get ugly when he realizes he is a pawn in a cruel corporate game.

Into the night (2020) – a Belgian series – When the sun starts to kill everything in its path, a plane full of passengers must travel at night in an attempt to escape its destructive power and find someplace safe.

Marianne (2019) French horror web television series created and directed by Samuel Bodin, written by Bodin and Quoc Dang Tran and starring Victoire Du Bois, Lucie Boujenah and Tiphaine Daviot. The plot revolves around the young novelist Emma who realizes that the characters she writes in her horror novels are also in the real world

Mythomaniac (2019) Series – Burned out and taken for granted, a working mom suspects her partner is cheating, so to win back his attention, she feigns a medical diagnosis. Maria Hands

Nailed it! France (2019) Game series – “Nailed It!” game travels to France, where amateurs with a taste for catastrophe compete to make edible wonders; There is a €5000 prize to win! comic Artus hosts with chef Noémie Honiat.

November 13 – Attack on Paris (2018) Documentary Series – Filmmakers Jules and Gédéon Naudet direct this three-part documentary that explores the human stories behind the Paris terrorist attacks of Nov. 13, 2015. “November 13” follows the chronology of the events, sharing the testimony of people who were brought together by tragedy — from survivors to first responders and the leaders of the French government. Among the stories told are those of concertgoers at the packed Bataclan theater who sought refuge when caught in a harrowing scene. Following the attacks, the city comes together.

The Circle France (2020) – a French reality competition show which first aired on Netflix on 9 April 2020 that is based on a British TV series of the same name. The show bills itself as a game based around social media, with the concept that “anyone can be anyone in The Circle“. It has been compared to Big Brother and Catfish in format, as well as Black Mirror episode “Nosedive” with the concept of ratings.

The Forest (2019) – Series – Police investigate after a teenaged girl, Jennifer Lenoir, disappears in a forest in the Ardennes, France, and is assisted by her teacher, who had a traumatic experience in the same forest when she was young.

The Frozen Dead (2017) – A dark mystery stirs a small town in the French Pyrenees, after a group of workers discovers a headless body of a horse. Commandant Martin Servaz dives into the investigation and begins to unravel a dark story with years of history.

Transfers (2017) Series – Five years after drowning in a boating accident, ordinary man Florian Bassot wakes up in policeman Sylvain Bernard’s body, with scientists having found a way to transfer his consciousness. This sci-fi series won the International Press Jury Award for Best Actor and Best French-Language Series at the Series Mania

Twice upon a Time (2019) – a mini-series by Guillaume Nicloux – Vincent Dauda, still reeling from a breakup, receives a package with mysterious properties that could give him a chance to win back his ex, Louise. Casting Gaspard Ulliel.

Vampires (2020) – A Paris teen who’s half-human, half vampire grapples with her emerging powers and family turmoil as she’s pursued by a secret vampire community. By Benjamin Dupas and Isaure Pisani-Ferry.

Versailles (2015) – Series – Franco-Canadian historical fiction; In the wake of the Fronde in 1667, the French nobility has begun to defy and disobey the monarchy. Young King Louis XIV (George Blagden) decides to move the court from the Château de Saint-Germain-en-Laye near Paris to his father’s former hunting lodge near the hamlet of Versailles as a means to force their submission. As Louis renovates and expands his new Palace of Versailles, the nobles—displaced from their usual surroundings but compelled to surround the king—become embroiled in increasingly dangerous intrigues.