The Pioneers of French Theater in San Francisco by Frederic Patto 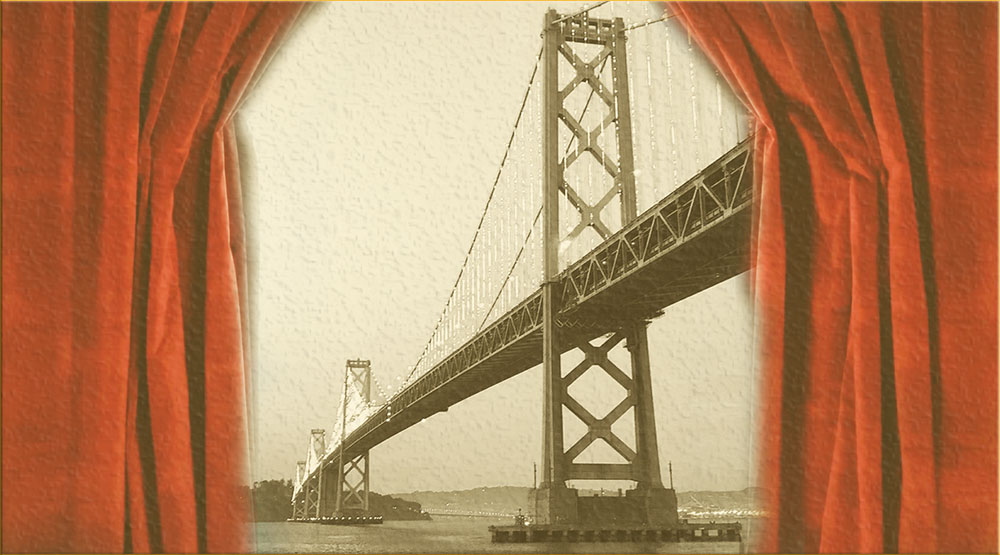 Frédéric Patto, Director of TLF San Francisco hands us a little gem: the history of French theater in San Francisco from the gold rush to the beginning of the 20th century.

Did you think that the TLF, a French-speaking theater located on the premises of the Lycée Français de San Francisco, was a distinctiveness of our time? Think again! Since the days of the gold rush, enthusiasts have sought to entertain their contemporaries. This article is the first in a series retracing the great adventure of French theater in San Francisco, from its creation to the present day.

Gold was discovered in California in 1848. Thanks to the telegraph, the news spread throughout the world, and in particular in the big French cities. Between 1848 and 1854, more than 5,500 French disembarked in San Francisco, after a perilous journey of more than six months going through Cape Horn. They are of all ages, bourgeois, nobles, craftsmen, workers, artists, and all daydream of the American Eldorado. Many come from Paris and the big cities. It must be said that in France we are in the midst of the Revolution. While some are making plans for the wilderness, others, on the other hand, simply want to work, because unemployment is very real.

The beginnings of French theater in San Francisco (1850) 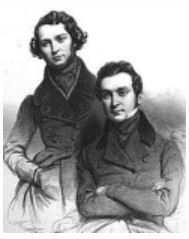 The fabulous history of French theater in San Francisco really begins in February 1850. French actors present the first vaudeville: Bruno le Fileur from the Cogniard Brothers, great French playwrights. The new National Theater located on Washington Street, between Montgomery and Kearny Street, hosts the performance. Against all odds, the French community rushed there, happy to be able to meet and have fun. The success of this first attempt then prompted other immigrants, including three women: Mesdemoiselles Racine, Adelbert, and Courtois, to create the first French theater company “The French Vaudeville Company”.

They recruit French actors and present one Sunday in December of the same year a series of vaudevilles in one act, Parisian successes of the time including Les Petits Souliers, Le Commis, La Grisette, Le Pauvre Jacques. The first performance is sold out. The French then took charge of the Adelphi theater located in the heart of the French Quarter, on Commercial Street. The three actresses offer two performances per week. This ancestor of the TLF becomes a high place of entertainment and socialization for the French community.

The resounding success of this French company prompted another Frenchman to embark on the adventure: Parisian Albert Benard de Russailh, then in search of a new source of income. Opportunist, he creates a new troop and gives it the unoriginal name of the “Second French Vaudeville Company”. There, he recruits actors he met during his crossing on the Joseph boat. Among them, Alexandre Munié de la Porte St Martin, his brother Jules Munié, Charlot de la Gaieté, and Madame Bruneval from Folies Dramatiques, all confirmed actors.

Albert Benard, however, is not a man of the theater, at most an informed spectator. Its story is worthy of an adventure novel. He landed in San Francisco in March 1851. But then he could not afford the equipment to go in search of the precious metal. Realizing very quickly that it was undoubtedly easier to extract gold from the pockets of miners than from mines, he began to trade toothpicks and then watches. But following complaints about the questionable quality of his merchandise, the local authorities forbid him to continue his business.

Convinced that he was the victim of discrimination against the French, he wrote a letter published in the Daily True Standard, the only daily with a few columns in French. The next day, the newspaper’s French department editor, also a gold digger and keen to return to the mine, offered him his position. Neither a writer and even less a journalist, Albert Benard thus becomes the new editor-in-chief of the French department of the Daily True Standard, just a few weeks after his arrival! He therefore naturally wrote the first reviews of French vaudevilles. While he welcomes the initiative of the three women, he is nonetheless overly critical and criticizes them for certain amateurism. He created a new theater troupe in order to offer better quality shows. But his intentions, while laudable at first glance, are nonetheless essentially pecuniary. His salary as an editor barely allows him to afford a good dinner. 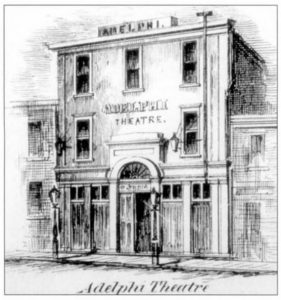 The first performances of the “Second French Vaudeville Company” are also played at the Adelphi theater. This does not suit the creators of the first company, who force the management of the theater to dismiss this new troupe which has come to overshadow them. Therefore, Albert Benard makes an agreement with the American directors of the Jenny Lind theater: the troupe can play there on Sundays, provided that the show is local. This is how he wrote his one and only vaudeville, Le Génie de la Californie, en three days, and presented it on Sunday, April 20, 1851. It was a real success.

First a journalist, then manager of a theater company and now a writer, Albert Benard is living his American dream. But numerous fires regularly ravage entire districts of the city. Those of May 3 and 4, 1851 destroyed the two theaters and the newspaper room. Without a source of income but still opportunistic, Albert Benard tries to convert himself into architecture for the reconstruction of the city, but this time, without success. He then left San Francisco, first for its suburbs, where he lost the rest of his possessions in another fire, then he left to explore California. Returning to San Francisco a few months later, he died of cholera in 1852.

His eulogy is pronounced by le Vicomte Jules of France, another opportunist with a romantic destiny, as extraordinary as it is tragic. A direct descendant of Robert the Strong, father of Robert I, king of the Franks, the Vicomte improvises a career as a nanny, a journalist, and a playwright. His vaudeville “Monsieur Gogo in California” stirred up interest(1) and was performed in June 1852 at the Adelphi Theater, newly reconstructed on Dupont Street (now Grant Avenue). However, at the end of 1852, under the Second Empire, with the nobles recovering their titles and properties, he decided to return to France. Broken, but helped by friends, he managed to set sail. His return was short-lived as he died shortly after arriving in Le Havre.

The three founders of the “French Vaudeville Company”, meanwhile, still live in San Francisco. As soon as the Théâtre de Adelphi reopens, they will present new vaudevilles by contemporary French playwrights, such as Le Fils d’un Agent de Change by Eugène Scribe, or Mademoiselle de Liron by Adrien Decourcelle. The Adelphi troupe then performs again twice a week. In August 1852, the theater was sold to Americans and French artists were limited to exclusively Sunday performances. In 1853, however, the French took charge of a new theater, Union Theater, located at the corner of Commercial Street and Kearny Street. They create a new theater group there.

On Sunday, September 18, 1853, a new competition began: La Biche au Bois by the Cogniard brothers at the Union and La Fille du Régiment, a comic opera by Gaetano Donizetti at the Adelphi. Again and against all expectations, the two theaters are almost full. Journalists of the time were astonished at the diversity of the public because, despite the language barrier, it was not uncommon to meet Americans, but also non-French-speaking immigrants, undoubtedly attracted by the burlesque situations that French vaudevilles offer. Even American actors attend the performances, in order to learn French acting techniques, more avant-garde and natural. New troupes then sprouted like mushrooms. Other theaters in the city, including the American and the Metropolitan, in turn, host French productions. At the end of 1854, the theater in French dominated the cultural life of the city and contributed with the cafes, restaurants, and French shops, to make San Francisco the “Paris of the West”. 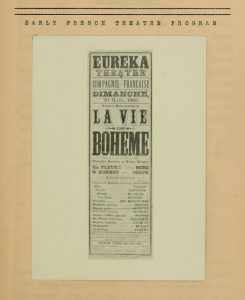 The end of the gold rush precipitates that of the golden age of French-language theater. Around 1856, many French people left the city for British Columbia in search of new deposits, or for France, which had become more stable politically. Theatrical performances in French are becoming increasingly rare. From biweekly they change to fortnightly, and on Sundays only. To top it off, the state of California enacted the so-called “Sunday Ban” Act in 1858, banning theaters from opening on Sundays. Under these conditions, the French theater can only decline. There are many other attempts, but they remain ephemeral, such as “La vie de bohème“, played at Eureka theater in 1863, or “Othello polyglot” performed in English, French, German and Danish in 1867.

In January 1870, the French artists who stayed in San Francisco saw a ray of hope with the abandonment of the “Sunday ban”, but also the arrival of a new wave of immigrants. However, the situation differs from the 1850s. These new French people come mainly from the provinces. They are less used to the theatrical offers offered by the French capital, and their social life is mainly organized around regional associations or committees such as La Société Alsace-Lorraine, La Gauloise, or La Ligue Henri IV. More concerned with integrating into their new country of residence, they are more fond of American places of entertainment. Like American families, they also frequent the new parks, notably Golden Gate Park, opened in 1870. These new walks considerably change the Sunday habits of families and spell the end of an already dying French theater.

It was not until 1911 that French theater was reborn from its ashes, but that’s another story…