Webinar FACCSF – What’s next in the wine industry? 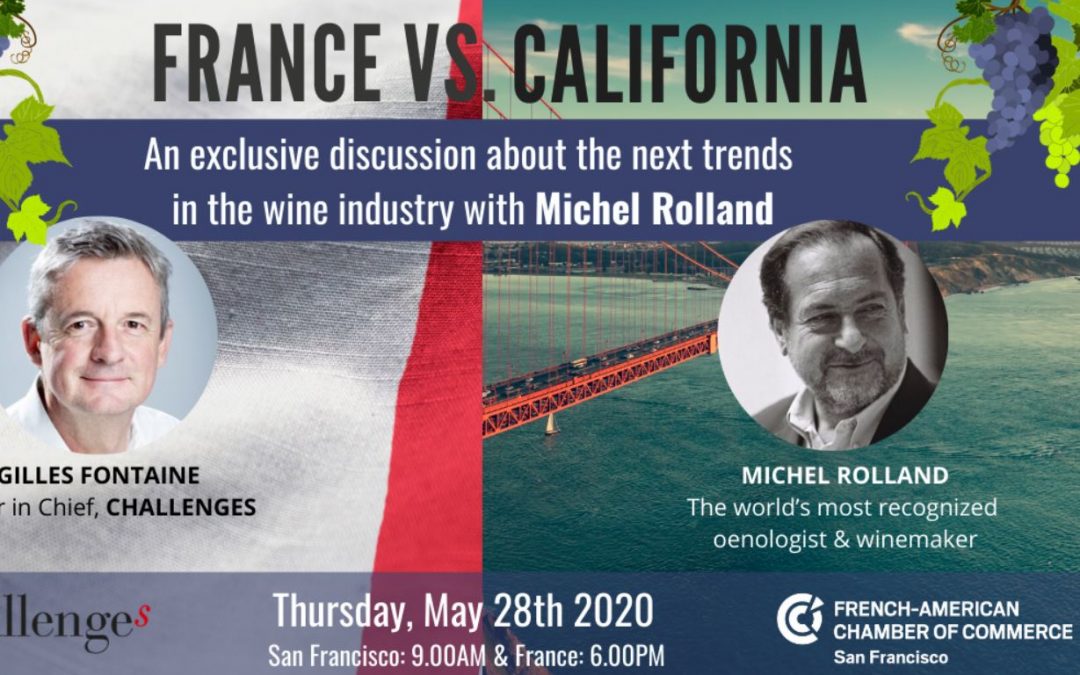 Members and non members can join this webinar for free.

What are the next trends in the wine industry in France and in California?

France is one of the largest producers in the world. Wine is considered as part of the country’s social identity.
The U.S. is the fourth-biggest wine producing nation on the planet right after France, Spain, and Italy. California, also known as the “new world” in wine (wine regions of Napa, Sonoma, Mendocino, Paso Robles..) is the leading wine producing state in the country.

If you are interested in this topic, you can read this article that mercisf has done one month ago about the impact of Covid on local wine industry.

** What are the trends and predictions on both sides of the Atlantic? **

For this 2nd edition, the FACCSF invites you to join an exclusive discussion between the world’s most recognized oenologist & winemaker Michel Rolland and Gilles Fontaine, editor in chief at Challenges magazine.

Among many topics, Michel Rolland will share his opinion on the following questions:

About the speaker:  Michel Rolland  The world’s most recognized oenologist & winemaker

Having grown up near Libourne, half an hour east of Bordeaux, Michel Rolland has become the most consulted and most acclaimed oenologist on the planet, making wines that appeal and accede to the highest ranks in classifications. Born to a family of winegrowers, he was destined to take over the estate, but his ambitions were higher: he wanted to understand the secret of great vintages.

Since the 1960’s he has been behind major changes in winemaking and vine husbandry, which he has promoted around the world. Today, the Rolland laboratory has seven employees and four hundred estates, which come for analyses and advice. Nicknamed “the king of blending”, Michel Rolland is passionate about every new project.

This event is organized in partnership with Challenges

FACCSF - There is No Planet B: Actions for a Brighter Future
French Painter Edwige Fouvry At Dolby Chadwick Gallery
Riopy's Concert at the Bimbo's
Jean-Yves Thibaudet performs at the San Francisco Symphony with MTT
The Beauty and the Beast by Jean Cocteau set to music by Philip Glass
Last minute: Polo & Pan Add a Performance at 1015 Folsom