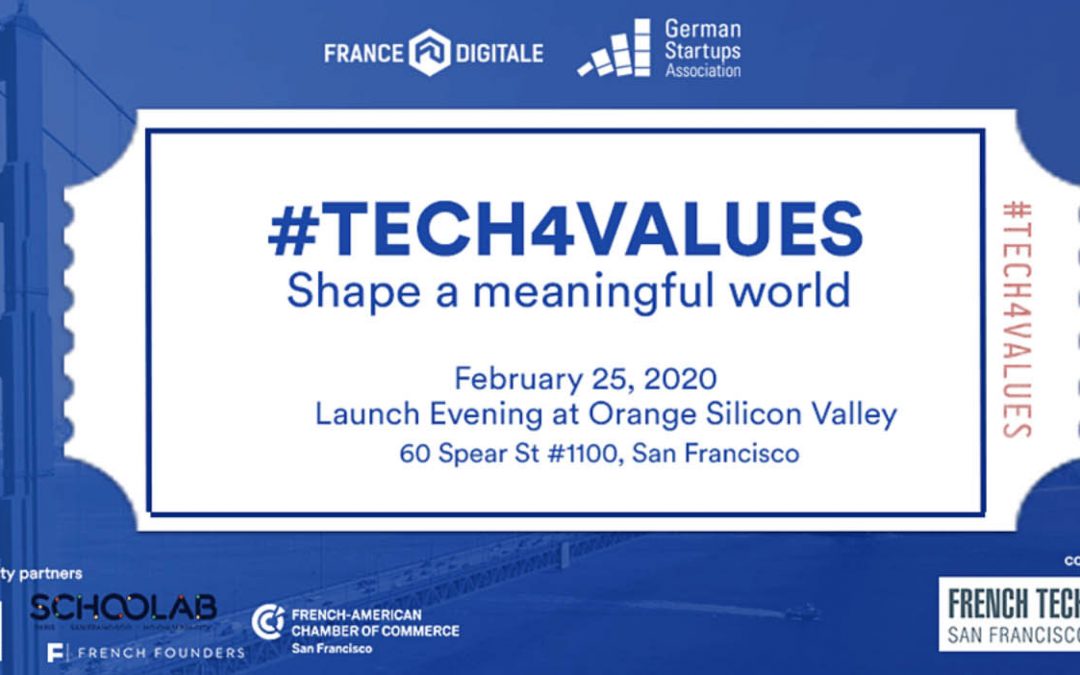 Tech4Values ​​is an event designed by France Digitale, an group of entrepreneurs whose mission is to transform France into a territory conducive to the development of startups, in France and internationally.

In line with very real concerns like climate change, Tech4Values ​​wants to highlight companies that advocate, in one way or another, better use of our resources.  The event wants to show that with these values in mind, enterprises can recruit and retain talent in France and Europe.

The first edition of this event will take place on Tuesday February 25, 2020 in San Francisco.

The goal is to bring together expatriates and locals currently working in the United States, to show them examples of companies based in France and in Europe, and to present to them what is being done in terms of eco-responsibility. through the testimonies of VCs, or even of institutions like Schoolab or INSEAD.

Among the members of this delegation, which come partly from France, we note the presence of Frédéric Mazzella, founder of BlaBlaCar company whose foundations are based largely on eco-responsibility. Blablacar, it’s 1.6 million tonnes of CO2 saved each year, the equivalent of the emissions generated by transport in Paris in one year.

Co-president of France Digitale, Mazella does not hesitate to say “that he wants to send the message to expatriates that they can come back strong of their American experience and put it at the service of French and European companies that share these same values ​​”.

The whole ecosystem of local French start-ups has mobilized behind this initiative by bringing together the FACCSF, Schoolab, French Founders, the French Tech San Francisco. The initiative being intended to be European, Holland in The Valley, the German Startups Association, and the German American Business Association are also partners.

This evening will be followed by two days of targeted meetings for those who would like to know more about working in Europe.

It is an evening to discover the new trends and values ​​of the technological industry in France and in Europe, and to meet recruiting companies.

This initiative highlights the importance of the collaboration of the community at large.