Night of Ideas, a follow-up with Dominique Nora, its special guest 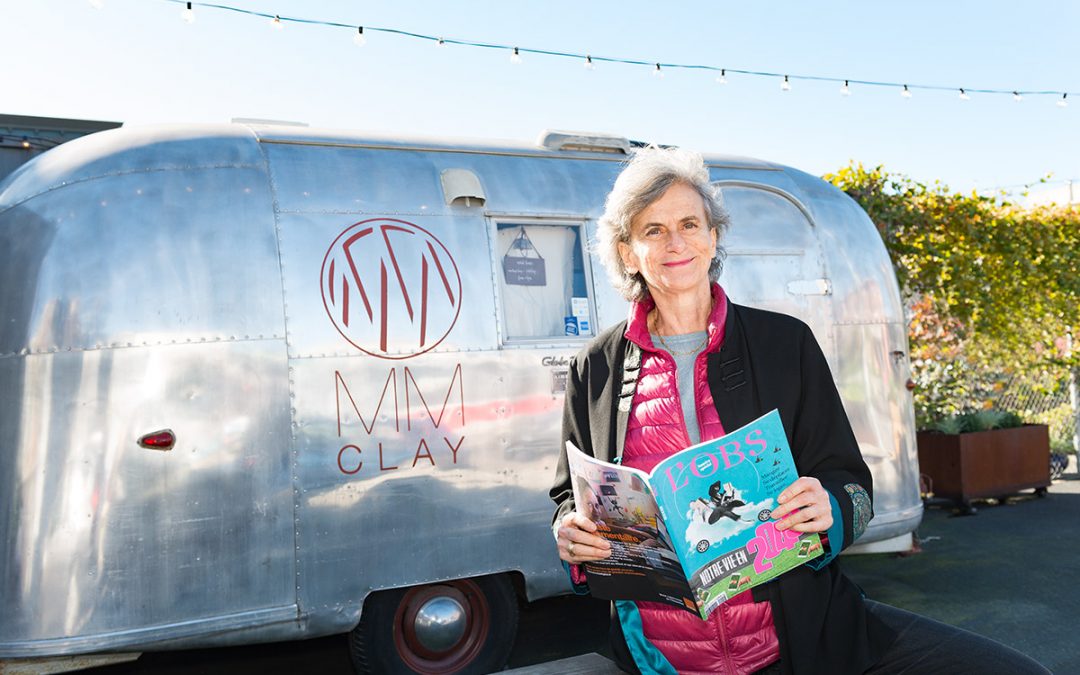 We continued the Night of Ideas with the complicity of Dominique Nora, Chief Editor of L’Obs, which is the French equivalent of Time Magazine.

She was the “guest star” for this event which brought together more than 5,000 people, a hundred speakers and nearly 180 artists at the SF Public Library on Saturday evening.

For those who are not familiar with the Night of Ideas, it is a world initiative of the French Institute which each year, offers to all, intellectuals, researchers and citizens to reflect and debate around a common theme.

This year, the theme “Being Alive” invited to discuss the questions raised by technological change and the advent of artificial intelligence in particular.

After the Night of Ideas, Dominique Nora took the time to answer our questions because we wanted to hear more, much more. Here’s a summary of our conversation for MerciSF.com readers.

Dominique Nora, why did you choose to participate in this Night of Ideas?

When I became L’Obs editor in chief, I wanted to modernize the editorial line with subjects that have always fascinated me such as the digital transition, GAFAs, biotechs, the evolution of medicine…  I wanted to give the magazine a forward-looking dimension.

Over a year ago, I inaugurated “Our Life in 2049” initiative, which consists of an exploration of our daily life in 30 years: transport, culture, consumption, housing, so many themes that give rise to articles, reports or even events in Paris and in the provinces. We have collected the point of view of futurologists, scientists, entrepreneurs, philosophers to try to find answers to those questions. Quite quickly, we had the idea of ​​making a forward-looking special issue “Our Life in 2049” which would bring together some of this work.

When a friend living in San Francisco came to tell me about the Night of Ideas, its size and the fact that it was going to take place on  Feb 1st, the convergence seemed quite natural; our date of publication was scheduled for January 30, 2020.

The Night of Ideas takes place simultaneously on five continents. Why did you choose San Francisco?

But it’s San Francisco that chose me! It must be said that I lived here during Obama’s election campaign as L’Obs magazine correspondent and that I love this city. I did not even to look elsewhere…

The Consulate of France in San Francisco that manages the event, asked me to suggest a program and this is how the idea of making a global intervention around “2049” followed by two panels with the theme of future medicine and AI, was born.

These are, in my opinion, the two most avant-garde subjects because this is where the impact on society will raise strong ethical questions.

The augmented life, eugenics or researches on gametes can change the lineages of the human species … Same thing for artificial intelligence.

In your speech on Saturday evening, you mentioned globalization as being a “problem” unlike the other subjects on which you seem more optimistic. You cited Paris Climate Talks as a “half success”. Do you have another example where globalization presents a “problem”?

The rise of populisms is not unrelated to a poorly controlled globalization where we feel both a technological acceleration, a hyper financialization and the fact that large companies like Google, Facebook, or Amazon impose cultural values ​​which are theirs, forged in the United States but which do not correspond to European values. We see it on taxation, data privacy, or competitive predation that they do in Europe.

I have the impression that this globalization has had positive sides, it has allowed many countries to develop, a growth in wealth, a progress which is indubitable, but I think that we have reached a stage where it must take a break.

Now, this kind of fierce competition, this search for profit at all costs means that there are many people left behind. There is uneasiness both in identity and in economic concerns which are really palpable. I think that to counter this, we must ask ourselves, on each continent the question of knowing what our values ​​are; and how we discuss it with others.

This globalization is beneficial but it must be adapted.

When we talk about differences in values ​​in France and the United States, do you see a gap in the last 10 years?

I really think that France moves at two different paces with a young generation of urban, educated people, who have come closer to American points of view, who are in the movement of start-ups … sort of world travelers. At the same time, there is a tension within people who do not have access to all this, and who sometimes express themselves in a violent way when we do not listen to them.

In the United States, we see the same phenomenon in a way; Trump’s voters are the American yellow vests.

So, it is difficult to oppose France and the United States, because in both countries, this gap has increased.

In France we have a problem of elites who have not paid enough attention to the fact that the social elevator is going completely haywire.

However, there are European countries which have been much more successful than us on this specific subject. I had the opportunity to speak with the Minister of Education of Switzerland recently; she told me that almost all the big bosses in Switzerland have gone through apprenticeship. There is more permeability between social classes. It is more fluid, and these are, in my opinion, crucial questions for preserving democracy in the long run.

We have started to work on the theme of agriculture and we think that for the time being, it is necessary to reconnect the metropolises and the surrounding territories with more proximity.

There is the example of Liège in Belgium (visit our site) which has reinvented its agricultural supply in the vicinity. But we will talk again about agriculture because our forward-looking approach is not over. Exploration continues in 2020.

One of the Night of Ideas panels addressed the theme of Medicine of the Future. Do you want to share a few thoughts?

I think that there is a big contrast in the European approach to medicine and the transhumanist approach that we see here. One must not generalize to all of Silicon Valley, but there is an engineering approach to humans. They are going to try to understand the human body as they would understand the functioning of a machine, they want to be able to replace the organs like spare parts, or boost the brain like they do with a hard drive … Conversely, in France it’s more complex, because we ultimately know very little about humans. Medicine is very advanced but it seeks to improve things, to repair… not to achieve immortality or singularity.

Anyway, in the United States, people like to throw themselves crazy challenges. For me, this is the essence of Silicon Valley, the way of pushing back the new frontiers, launching out impossible challenges which lead to surpass oneself. This allows people to discover things that they would not find if they did not dream big.

It’s quite attractive but it also leads to extremes, and the problem is not to kill innovation but regulating technology as it falls under the grip of big companies.

This dream made the success of Silicon Valley but now if faces some serious backlash.

Have you met American entrepreneurs during this visit?

I met Dara Khosrowshahi, the CEO of Uber on Monday … We talked about car safety, driver status…. The paper will be online very soon on L’Obs website.

Tell us about the changes you have made to L’Obs since you took over?

Since my arrival two years ago, I have restructured all the publication, mixed the print and web copywriting, now everyone works on both media, in all time frames … No more apartheid between “young” people on the web and “old” people on the print.

We publish twice as many articles online as in the weekly magazine, which nonetheless remains one of the most widely read media in France with 160,000 subscribers. The digital platform has 45,000 subscribers in total and is taking off well.

You lived in San Francisco between 2007 and 2009. Have you seen any big changes since you arrived a few days ago?

I found the city center very different, with a lot more homeless.

To finish on a light note, can you share with us the names of three favorite places, restaurants, or walks in San Francisco bay area?

Lafayette Park at the top of Gough because you can see the ocean, Bolinas with its laid back culture, the San Francisco Zoo because I was going there with my children, and the Exploratorium when it was still at the Palace of Fine Arts.