Interview with Philippe Etienne, Ambassador of France to the United States 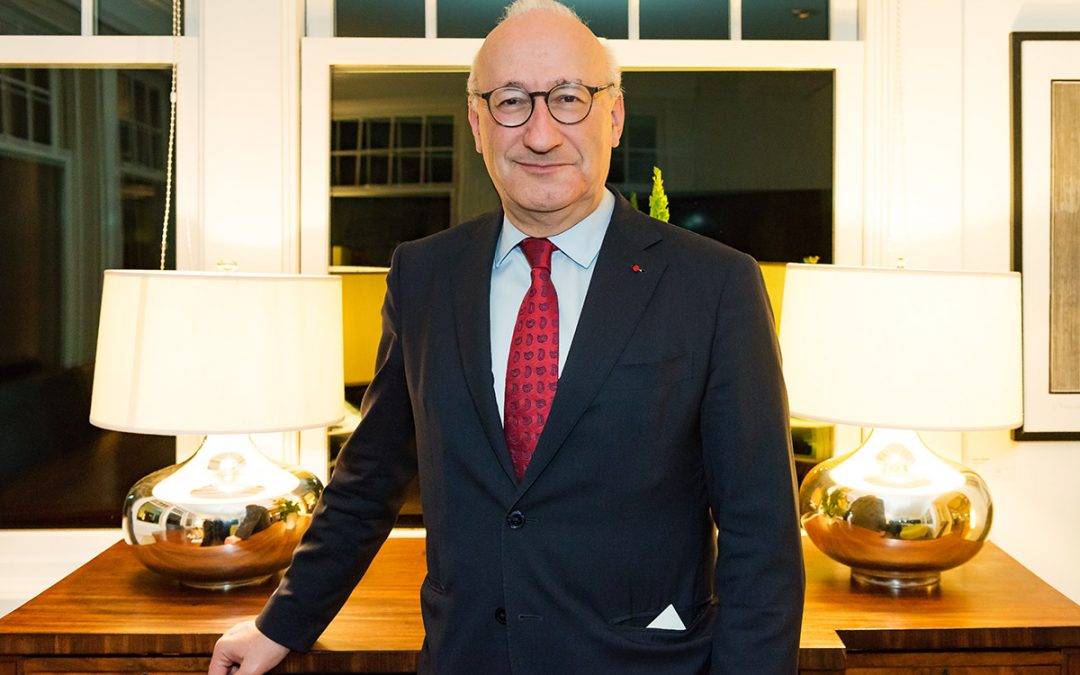 Philippe Etienne, the Ambassador of France was visibly delighted with his visit through the bay area which he described as “the place where the future of the world is formed.”

In front of a packed house at the Résidence de France, Phillippe Etienne praised the dynamism of the French community by paying tribute to individual initiatives, recognizing the energy deployed by institutions such as the French-American Chamber of Commerce, Business France or by the major French research centers such as the CNRS, Sciences Po, INRIA… all located in the bay.

He finally underlined the quality of the links forged by the consulate with local institutions such as the City of San Francisco, the SF Public library, KQED or SFMOMA and all those who participate in the Night of Ideas.

Mr. Ambassador, you visited Napa Valley during your stay. How does the wine community feel about the threat of a further increase in customs duties on French wine?

I could see a great deal of concern among those responsible for the wine industry, but I would like to make it clear that it is the entire industry that is opposed to these increases in customs duties because they will affect many more people than our French producers.

These are American companies, traders, importers, and restaurateurs … that will suffer if these new increases are applied.

To conclude on a positive note, I would like to emphasize that by meeting local players, I was struck by the importance of the industry related to wine production. It is a whole set of French know-how that I discovered in Napa. That’s truly impressive.

Silicon Valley has attracted French entrepreneurs for several years. Will the recent modifications in the duration of granting E1 and E2 visas change things? How do you see the future?

When the announcement of the change in the duration of visa allocation was made at the end of August, the American administration started by announcing 15 months, knowing that they had previously been allocated for 60 months.

We immediately contacted the American administration and said that this period was much too short and should be reviewed. We finally obtained that the 15 months initially announced be extended to 25 months.

It’s a shame, but we continue to work on this with the American administration. In particular, we hope that the renewal conditions will be made easier, as announced. The measure entered into force on November 12, 2019, we do not yet have much perspective on this subject, so I cannot comment further.

March is the month of the Francophonie in the world, can you say a word about what will happen in 2020 on the subject?

Local initiatives are managed by the consulates and not by the embassy.

But in general, I can tell you that President Macron has displayed strong ambitions regarding the learning of French language. His speech at the last Francophonie summit in 2018 in Yerevan, was unequivocal.

The year 2020 is particularly important for the Francophonie because it is the fiftieth anniversary of this institution. The conference of heads of state and governments with French in common, will be held in Tunis in 2020.

I would also like to highlight that the International Organization of La Francophonie is an effort common to 88 countries, it is a multilateral will, not an initiative of France.

Dans la Tête d'un(e) Pro de la Silicon Valley by Julien Boubel
French movie - La Haine is on Amazon Prime US
Podcast in French: Tanguy de Lamotte from Vendée Globe to Sausalito
Party Squasher to control rental occupancy and bring back serenity
A Michelin Star for Claude Le Tohic at One65
Ready to Run or Ready for Fun? Bay to Breakers is Back!!