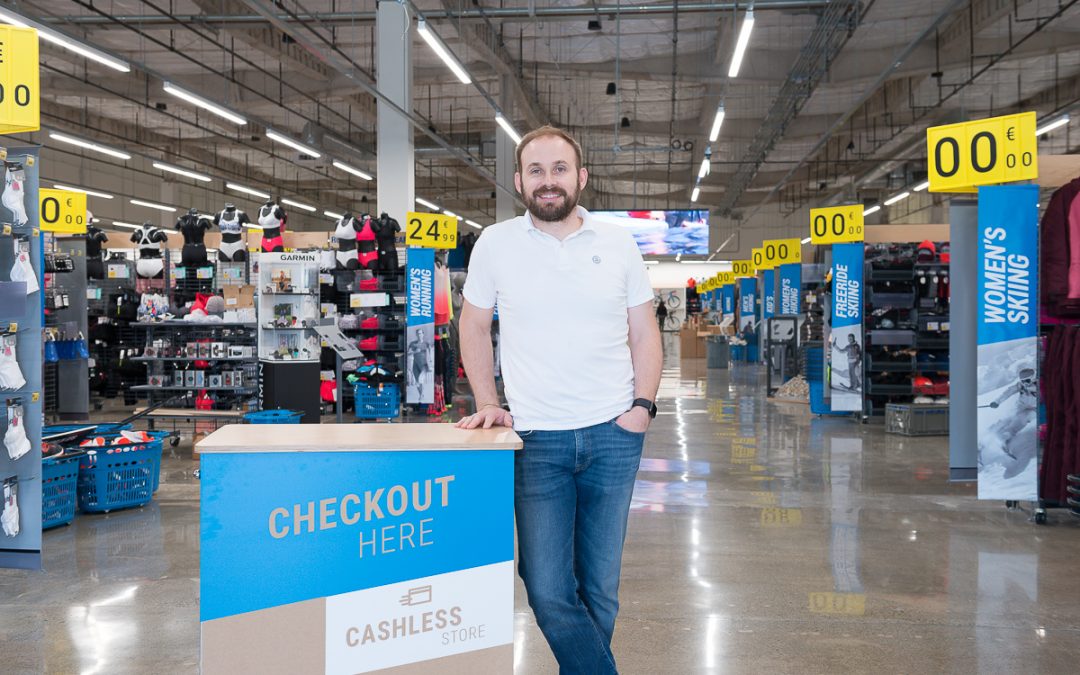 Decathlon’s American experience is like a marathon, but with a lot of technology … the influence of Silicon Valley maybe?

After opening its first small outlet on Market Street in late 2017, its large retail store in April 2019 in Emeryville, this is a third point of sale that Decathlon open in San Francisco Potrero Center on November 15th.

We met with Tony Leon -CIO of Decathlon USA-  to talk about those experiments but we first wanted to know how business was going… below, a summary of his remarks.

The experience, 6 months after the opening of Emeryville is positive.

The American public has reacted positively, and understands the advantages of our products, but we had some unexpected surprises too… For example, the so-called technical products (the tent with inflatable frames, the famous snorkeling mask Easybreath, bikes … ) sell very well in general. Consumers easily grasp the price/performance math. We have even been out of stock of waterproof golf shoes in a few hours following the publication of an article in a specialized magazine.

In contrast, mainstream, less technical products, such as sports shoes or some clothes that are bestsellers in other parts of the world, have a harder time finding their audience here. We discovered at our own expense, that or example to be successful, a woman’s yoga pants should have a certain cut and look…

But we are already adjusting the products ranges to better match local expectations. Since our production line is very integrated, it’s relatively easy to implement adjustments.

As a CIO, you have implemented many new technologies, from the robot running inventory to the cashless payment system. Can you tell us more about it?

It all started with a simple observation: no matter how much of a positive experience you were able to provide to your clients and/or the quality of the advice they received along the buying process, the fact that they have to wait in line to pay is not satisfactory. Spending five or ten minutes to finalize purchases while the cashier scans each product is not pleasant and sometimes even discouraging.

We have to adapt to the consumer expectations and that is where the cashless system comes in. 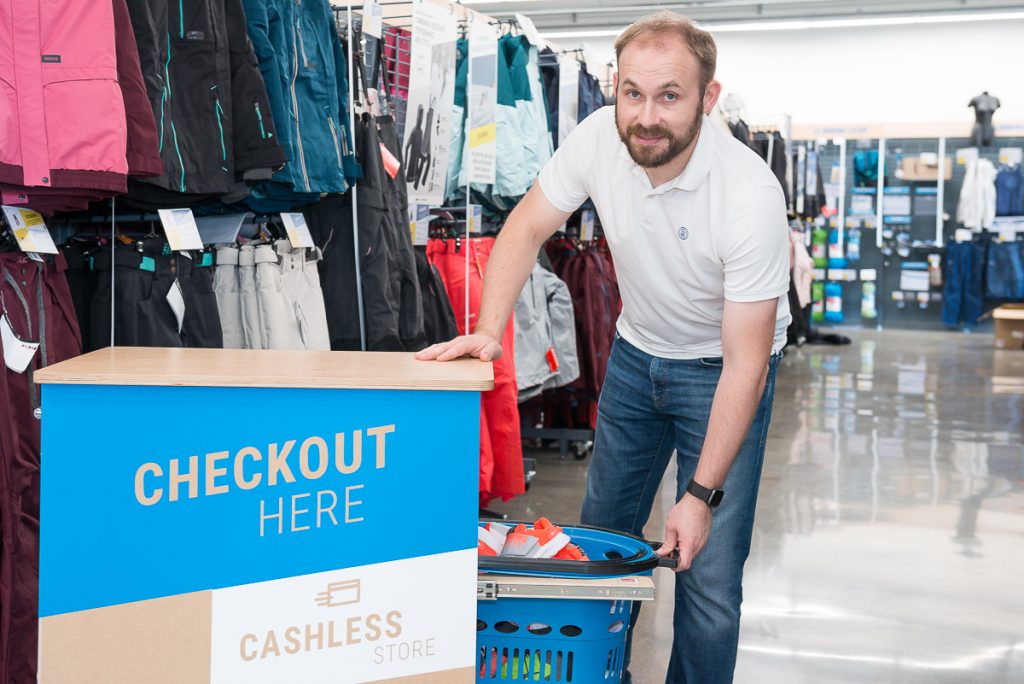 The principle is very simple: after putting the items in his/her basket, the customer slides the basket in a piece of furniture… our cashless system is built out of wood. Those cashless cashiers can sit either at the entrance of the store, or in the alleys … we move them around the store according to the affluence.

In a few seconds, the system hidden in the cashless cashier reads the RFIDs that are on each product. No need to manipulate each item to “scan” a price tag.

Then comes a sales assistant -there is always one near the cashless cashier. He takes his portable device to read the QR Code identifying the cashless cashier. Instantly, the mobile phone loads the details of the purchases of the basket and the amount of the receipt. The buyers only need to present their credit card … Well, it’s done, it’s paid … a minute, two minutes … effective. The feedback from the customers is very positive. 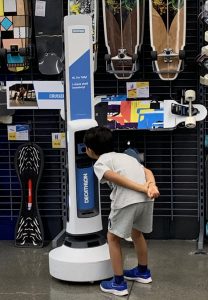 What about the robots that we meet in the aisles?

We started the robotic inventory in the Market St store in partnership with a local start-up, Simbe Robotics and Tally its mobile robot. Together, we adjusted the tool and finally developed a solution that met our needs. Tally walks the aisles during store opening hours and reads RFIDs to inform us of the status of the inventory sitting on the shelves.
I am proud to say that our inventory is 100% robotized with a reliability rate of 99%, all in real time.

Being based next to Silicon Valley has been a positive factor to put all these technologies in place?

Clearly, yes. I have a team of only six people for the entire project and the local environment has allowed us to move much faster than elsewhere.

The entrepreneurial spirit is such that when a large group like Decathlon talks to a start-up and offers a partnership to implement its new technology, the start-up is not afraid. The start-up team is even happy to be able to put forward a concrete implementation. This mindset is pretty unique.

Do you plan to implement these new technologies in other parts of the world?

Replicating the technologies we are developing here, would require that we transform our historical information systems. The complexity is such that for the moment, we have no project in this direction.

Do you think there is a future of the brick and mortar store?

The United States has a bit of a boring retail experience. When you look at department stores or shopping malls it looks a little bit dated. Nevertheless, I am convinced that the physical store is not dead and the path is open to different experiences. For example, why not mix the big classic point of sales with smaller outlets that would have a seasonal or ephemeral products selection? We have a lot to test and our location in Market St can be used for that.

Other Decathlon stores opening planned in the United States?

Not for the time being, we feel we have not done the full tour of the Bay … We will focus on the Peninsula before going elsewhere.