Chef Nico participated to LA SOIREE, the gala of the French American Chamber of Commerce 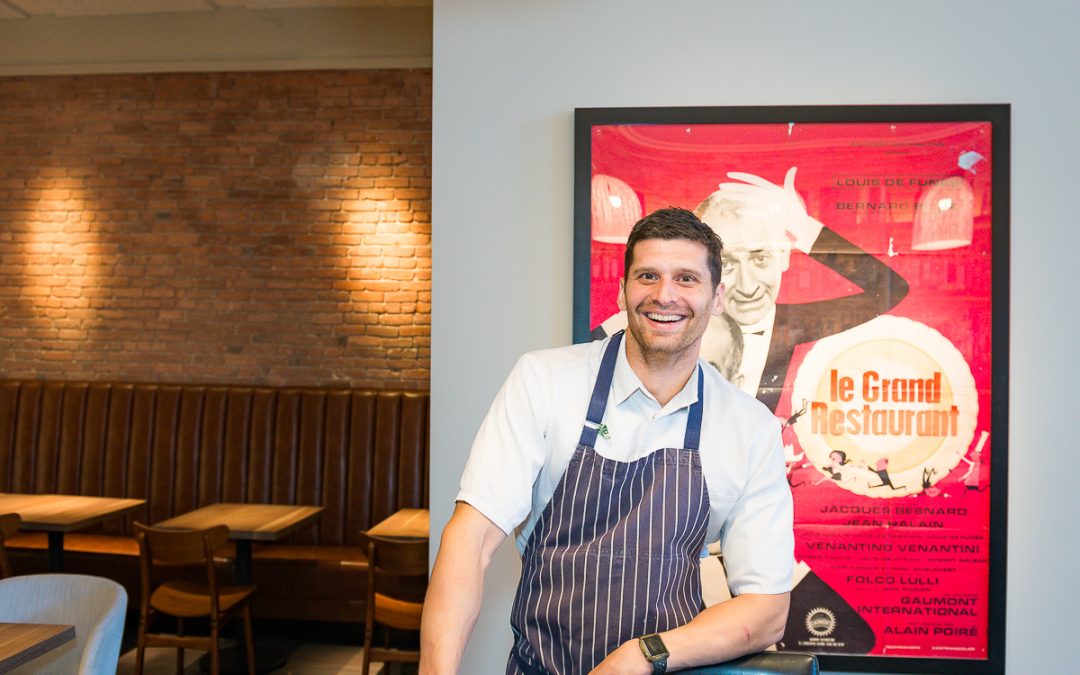 The gala of the French American Chamber of Commerce of San Francisco is an opportunity for local chefs to share their talent. Chef Nico took part to the gala dinner of this 2019 edition.

Some chefs know very early on what they are going to devote their professional life … for Nicolas Delaroque, aka Chef Nico, the passion of cooking grew on him as he was discovering the world. His taste for travels has helped him assert his wish to please others by cooking.

As a teenager, he was not sure how to navigate professionally. His mother was a florist, his father an accountant, nothing predisposed him to his future career. Yet the family had a friend restaurateur who suggested him to try cooking school.

Nico tells us that what he liked the most about his training was the idea of ​​being part of a “team”. The training in France is based on sharing the time between cooking school and internship, he immediately appreciated the team spirit that reigns in a kitchen.

After spending some internship in challenging environments like Hotel Scribe in Paris, he understands as early as 16 years old  “the realism of things”. Working in a kitchen is a difficult and demanding job in many ways.

Curious and ready to discover the world, he leaves for Australia. Speaking very little English, he plays it by ear and works in a brewery held by a Belgian in Brisbane. This year in Australia leaves him with a good memory, but he nevertheless returns to France where he joins Potel and Chabot, the upscale catering company.

Soon the wish to travel takes him back and he decides to live in an Anglo-Saxon environment. He moved to Canada to join the Fairmont hotel restaurant in Quebec City. In his own words “the adrenaline that reigns in kitchens made him grow up”. He liked it.

When asked what he learned to cook in Quebec, he answered without hesitation the venison among which the caribou … Not sure that this ability serves him much outside of Canada but the experience of the Fairmont hotel makes him want to pursue his adventure in another large hotels chain.

The opening of the Intercontinental in San Francisco (on Howard and 5th St) is imminent and that’s how Nicolas arrives in the Bay. There, he meets Dominique Crenn and work directly with her. She initiates him to contemporary Californian cuisine. It’s a real revelation.

After the Intercontinental, he works at Manresa in Los Gatos where he again learns a lot from Chef David Kinch. Two years later, Nico feels ready to take the challenge of opening his own restaurant “to please people with my cuisine”.

He opens Restaurant Nico that some of you might have known on Sacramento Street. He wins his first Michelin star, that he will keep until now. About 2 years ago, he moves Restaurant Nico from Pacific Heights to 710 Montgomery St, near the Transamerica Pyramid.

But during our interview Chef Nico also announces us that he has decided to take a sabbatical year from January 2020. Do not panic … the restaurant will stay open thanks to his sous-chef who will take the piano during the absence of Chef Nico.

If you want to taste the rest of his menu before he leaves for France to rest and enjoy some family time, book now! Restaurant Nico is open from Tuesday to Saturday for dinner.

Holiday Gift Guide 2022 with A French Touch
Play in French: La Machine de Turing at TLF
DJ Sebastien Leger with his Modular Live Show, a US Tour
Kickstart 2020 with the new 30-day detox program of Valerie Orsoni
Legion of Honor makes Pastel Technique Shine!
A Frenchman Prepares to Cross the Pacific Ocean Solo with His Kayak