A juxtaposition of young talents and established artists, the exhibition highlights the vitality of the French artistic scene.
On display,  Tania Mouraud, Smith, Kalie Granier, Justine Emard, Fenx, Michel Eric, Delphine Diallo, and Anne-Charlotte Finel.
All the artists played the game of exchange and meetings to celebrate the dialogue between France and California in this first edition of the Festival Pulsions. 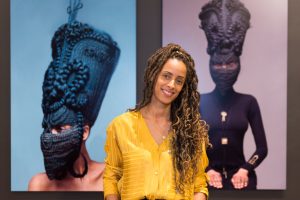 Zoom on the work of Delphine Diallo
Check the interview of Delphine Diallo, in French. You will discover an artist committed to women in general but more specifically on the condition of African women. She also tells us about her mentor, Peter Beard.

Zoom on the news of Tania Mouraud
We have been lucky enough to meet with Tania Mouraud; her news goes beyond the exhibition since she released a book on March 8th, 2019, obvious related to the International Women’s Day. 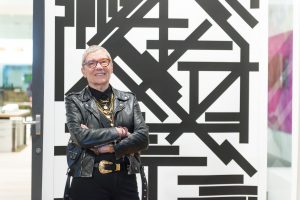 in large, very large format. In the Pulsions exhibition, you will see a format of more than 2 meters high but know that she also
paints building facades, billboards in 4 x 3 or museum walls when she exposes at the Pompidou Museum of Metz.

Tania Mouraud has therefore accustomed its audience to writing but not on a sheet of paper.
She shared with us her latest intimate work that appeared in the form of a book called FlashS ‘. It is a kind of long poem that runs on almost 150 pages and we have great pleasure to browse although it is mainly about pain. She evokes indeed death, mother, childhood, war then travel and always and again, the pain but the writing is really striking and we can not help leafing through. It can be ordered in France at Street visconti Editions

⚡️ PARIS IN SF ⚡️ Where can you be in Pari

🎥 AGNÈS VARDA 🎥 rétrospective at SFMOMA an