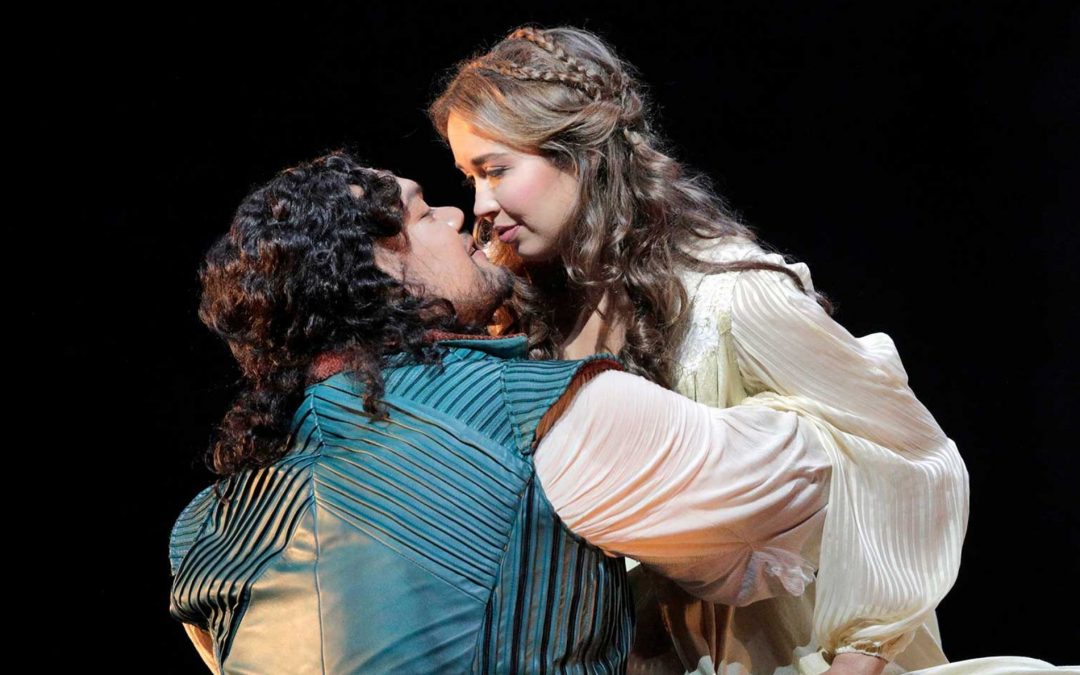 ACT I
A ball at the Capulets’ Palace.
After the prologue-overture which, as in Shakespeare’s play, presents an outline of the drama (chorus “Vérone vit jadis deux familles rivales”), the curtain rises on a dazzling ball in the palace of the Capulets. They are celebrating Juliet’s birthday. Her father, Count Capulet, the master of the palace, has promised her to Count Paris. Everyone admires the young girl’s beauty, and her father bids the guests to enjoy themselves (“Allons, jeunes gens!”). Two masked members of the rival Montague clan–Romeo and Mercutio–have slipped incognito into the ball. Romeo has dark forebodings, but his friend jokes teasingly that Mab the Queen of dreams must have paid him a visit during the night (“Mab, la reine des songes”). Suddenly Romeo sees Juliet at a distance and is immediately smitten with love for her. Juliet confesses to her nurse, Gertrude, that she would like to enjoy her youth before getting married (Arietta “Je veux vivre”). Seeing that Gertrude has been called away, Romeo approaches Juliet and declares his love for her, which arouses tender emotions inside her (Madrigal “Ange adorable”). The arrival of Tybalt, Juliet’s cousin, brutally shatters the enchantment. Romeo realises that his beloved is the daughter of his enemy Capulet, while Tybalt recognises the voice of the hated Romeo. The lovers are horrified to discover that they belong to two families separated by an ancient and hate-filled feud. The rules of hospitality forbid Tybalt from venting his anger, and Capulet orders the festivities to proceed.

ACT II
Juliet’s garden.
Night has fallen. Romeo is alone and enters Juliet’s garden. He sees her at her window and compares her beauty to that of the rising sun (Cavatina “Ah! lève-toi, soleil”). Juliet steps out onto her balcony and the two lovers pledge their love for each other. But their idyll is interrupted by the by the arrival of a group of servants led by Gregorio searching for some Montagues suspected of slipping into the ball. Gertrude sends them away and then calls Juliet in, scolding her for not being in bed. The lovers reluctantly take leave of each other, promising to meet again the next day (Duet “O nuit divine! / Ah! ne fuis pas encore”).

ACT III
Part 1
Friar Lawrence’s cell.
At sunrise Romeo and Juliet go to Friar Lawrence’s cell. Deeply moved by the force of their love he agrees to marry them in secret. Gertrude, who has arrived in the meantime, shares their joy (Trio and Quartet “Dieu qui fit l’homme à son image”).

Part 2
The public square in front of the palace of the Capulets.
Shortly afterwards Romeo’s page, Stephano, comes looking for his master. He mockingly compares the Capulets’ palace to a vultures’ nest where Juliet, a white dove, is living in bad company (Song “Que faistu, blanche tourterelle”). The reaction is swift: Gregorio challenges him to a duel. Mercutio rushes in to help Stephano. Then Tybalt rushes into the affray. Romeo runs in to calm everyone down and refuses to fight against Tybalt who is now his cousin by marriage. But Mercutio is mortally wounded and Romeo immediately avenges his death by killing Tybalt. The Duke of Verona observes the disaster and after pronouncing very harsh words against both families he banishes Romeo from Verona (Finale of the duels “Ah! Ah! voici nos gens! / Ah! jour de deuil, et d’horreur, et d’alarmes!”).

ACT IV
Juliet’s room.
Romeo has joined Juliet for one last night. She forgives him for killing Tybalt (Duet “Nuit d’hyménée”). The song of the lark announces the dawn, the moment of their heart-rending farewells before Romeo’s departure (Cabaletta “Il faut partir”). Capulet enters, accompanied by Friar Lawrence who has to prepare Juliet for her imminent marriage to Paris (Quartet “Que l’hymne nuptial succède aux cris d’alarme”). Alone with Juliet, who wants to die, Friar Lawrence persuades her to drink the potion (Scene “Buvez donc ce breuvage”). The friar leaves and Juliet begins to feel the effects of the poison (Aria “Amour ranime mon courage”).

ACT V
Interval.
Friar Lawrence is horrified to hear that Romeo’s page has been attacked and wounded before he could hand the letter to Romeo. He immediately sends another messenger in the hope that he can warn Romeo in time of the subterfuge.

The tomb of the Capulets. Juliet’s deep sleep.
Believing that Juliet is dead, Romeo takes one final look at her and then drinks the poison. Juliet slowly wakes from her deep sleep (Duet “O ma femme, ô ma bien-aimée”). Their joy at being reunited is shortlived. Romeo weakens. Juliet sees the empty phial and realises what has happened. She stabs herself. The lovers die in each other’s arms, imploring God’s forgiveness.
Courtesy of Teatro Carlo Felice Genova 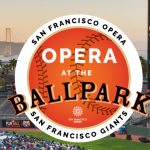 Opera at the Ballpark – Sept 21st performance: FREE live simulcast at Oracle Park. You will have to register for entry, even if free: https://www.eventbrite.com/e/opera-at-the-ballpark-general-admission-tickets-63916266273