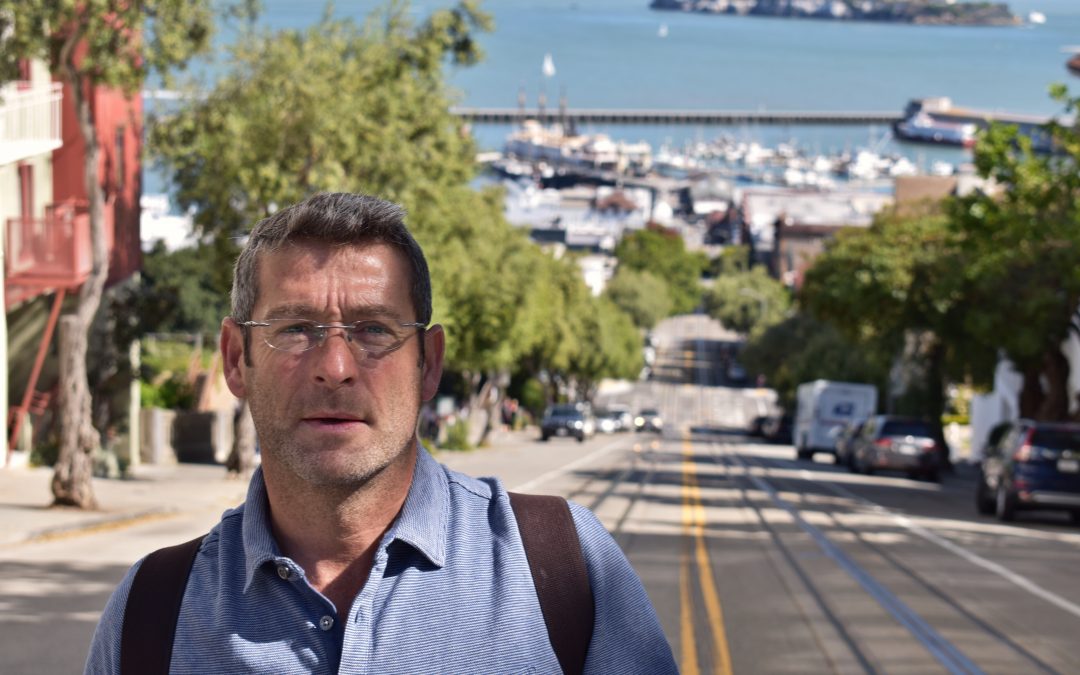 His credo – San Francisco guided visits on foot in French
His promise – Make you discover the “City by the Bay” differently, help you feel it.
How? By taking you by hand and explore a district, its architecture, its history and its population.

Meet with a passionate!

How and why San Francisco?
Originally from Brittany, I started working as a guide in the abbey of Mont St Michel in the early 90s!
I then worked for nearly 20 years at Disney (from the central office to the marketing department). Finally, I wanted to change, to open a new chapter in my life and I wanted to resume studies … That’s how I landed in San Francisco: I found a training in advertising and communication that I liked at the university of the city!

But did you know SF before?
Not at all ! I lived in New York City in 1989, I went back several times to the East Coast but I had never been to the West Coast. When I arrived in San Francisco, I had no idea what I was heading to … I had a backpacker’s guide in my pocket and some pictures in my head like the Golden Gate Bridge or the painted houses. I had prepared very well my departure but not my arrival. So, it has been a big surprise!

What first emotions?
I remember that it was raining. I bought an umbrella and started to walk around. I immediately took full eyes. I was very impressed by the sloping streets creating vertigo. I also remembered my first vision of California Street… Seeing this street, I thought “Whaouh”. Then, in the days that followed, I discovered this unique blue sky, the calm water of the bay, the waves of Ocean Beach, the wide open spaces, the omnipresent nature, the ideal climate, the mix of cultures, architecture … The immediate favorite! I was fascinated.

How is this city characterized?
San Francisco is a recent city that exploded in 1849 with a large wave of migration, a human movement going to the mines to fetch gold. It’s a city that came out of nothing. Today, it is no longer gold that attracts workers but tech. The story is reproducing!

How does it look like?
San Francisco is a multitude of small villages next to each other, between valleys and hills. Human-sized and multi-ethnic (Chinese, Mexican …). Its geography with its hills, the Bay, the Pacific, the Victorian houses, its immense park, and its great events like the earthquake of 1906, shaped it.

Other distinctive signs?
Its avant-garde! There is a reason why hippies, Beatniks, gays or transsexuals have flourished here … There is a tolerant and friendly atmosphere. There are also a lot of single people who like to party, a lot of people who love to dress up and one says that there are as many dogs as children!

Is there a flip side to the medal?
Yes! If San Francisco is at the forefront of ecology, organic or healthy life style, but there are also contradictions, including many social problems. Victim of its success, the city is not affordable at all and soaring rents has put many San Franciscans on the street. They do not have social security and mental illnesses just like addiction problems are very visible. The Tenderloin district for example, has become an open-air ghetto where drugs generate a big problem.

Why did you choose doing guided tours in French here?
Simply because it was missing! I tested everything that existed as tours. Options often classic and obviously in English … When my parents came, I thought it would be nice to imagine a fun product in the language of Molière. A project that allowed me to take advantage of my experience and combine my strengths.

What is your idea?
Urban hikes to soak up explored neighborhoods. Tell their stories and their people with authenticity!
The goal: to bring the spirit of the different communities to life. Attention, according to the visits, the public transportation are part of the journey. The cable car is an experience in itself. What interests me is to leave the memory and more than a guide, I see myself as a “friend” who shows his city!

Is there a “trademark” visit?
The theme of ” Summer of love ” in Haight-Ashbury works very well. We return to the history of the hippie movement, LSD, Beat generation, rock and the sexual revolution. We talk about music, art, youth. Gay neighborhoods, Castro, and Latino, The Mission, work well too. LGBT history and AIDS are poorly known and these visits break the codes of what we learn in history books!

How do the French react?
They often have prejudices about the Americans and I spend a lot of time going up the cultural thread of the two countries to help them understand certain gaps, to explain the habits and customs, and to illuminate the local functioning. Some people are interested in Trump, but I avoid talking politics … Just to explain the story!

Still unexplored corners?
San Francisco is evolving very fast. For example, right now Chinatown is not really renewing anymore. The population is old and young people go elsewhere … The Mission, conversely, moves and gentrifies. Bernal Heights, Portero Hill or the industrial district of Dogpatch are worth a visit!
I like exploring, again and again. Lose myself. I walk between 20 and 25 kilometers daily, pencil in hand. I love this city, I like the details and take the time. If I discover a small counter-alley, I borrow it! Then I note all this …

Some favorites?
Apart from the Victorian homes on the Haight-Ashbury side of Chinatown (one of the first areas I discovered on arrival), I have a little trip from the Ferry Building to Sausalito. I cross the Bay by boat and I walk back to my neighborhood in Russian Hill…

Thank you Charlotte from Beyond the Bridge

Polo & Pan to perform at Outside Lands in August 2022
Covid - The Rules to Travel to France Are Getting Looser
JR - The Chronicles of San Francisco at SFMOMA
Video - The Treasure Island of Stevenson at Point Lobos
The Pioneers of French Theater in San Francisco by Frederic Patto
Coronavirus - Impact of confinement on the wine industry...