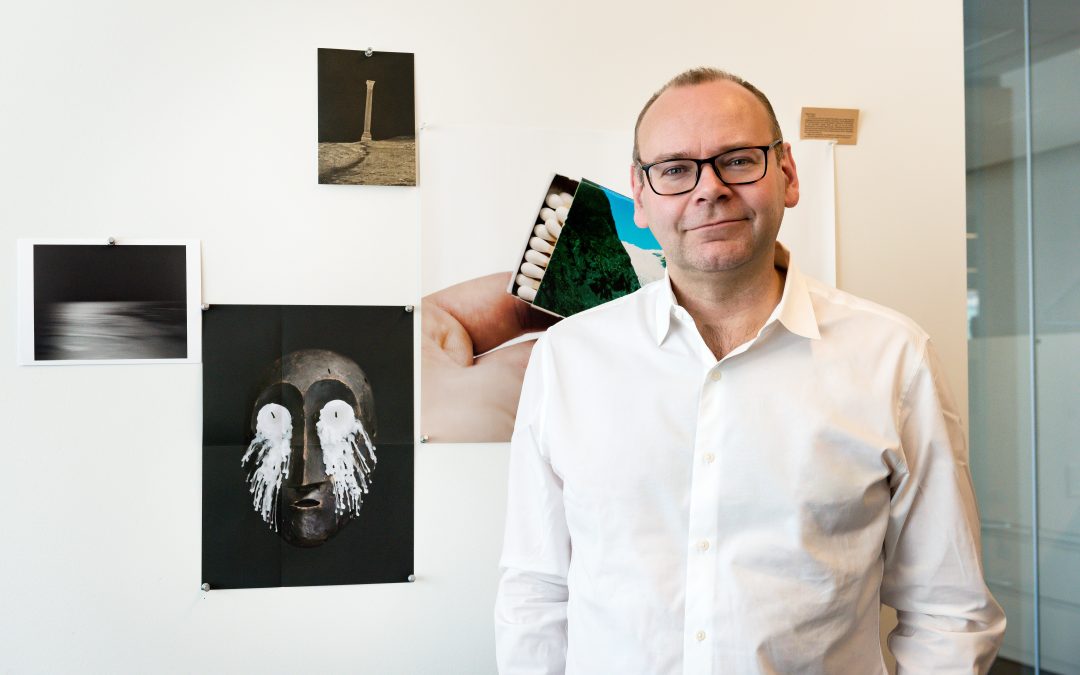 Clement Cheroux is a Senior Curator of Photography at SFMOMA.
His latest masterpiece, Snap+Share: transmitting photographs from mail art to social network is currently on display until August 4th, 2019. It takes you from turn-of-the century post cards to today’s Instagram.  It’s an amazing visual journey.

Three years after leaving the Paris Pompidou Center, Chéroux, has fathered three of the most popular photo exhibits in the world. He is a self-described photographic glutton … Thank you for having chosen San Francisco, Mr. Chéroux.

What generated your love of photography and particulary for the history of photography?
I was introduced to photography on a train. I was 16 years old, I was going to the south of France during the summer and the French railways company was doing an exhibition in one of the cars. This is where I discovered totally by chance, the work of three artists:

It was a real shock … For me, photography was family photos, advertising and newspaper photos. With this exhibition, I discovered that it could be a form of art. At the beginning of the next school year, I signed up for the photo lab and that’s how it all started.

What is your field of study?
I started at university by doing a bachelor’s degree and then a master’s degree in photography at University Paris VIII. I then went to the National School of Photography in Arles.
This dual course – practical and theoretical – distinguishes me from my fellow historians or theoreticians of photography. I’m a photographer, I know exactly what it’s like to do photography and art projects. This double background is very important to me.

Do you take pictures?
I only take photos with my cell phone, things that I put on Instagram when I visit artists or collections. I do not have a photographic “practice”.
When I was studying, I realized that I was not interested in taking pictures but looking at them and passing them on to others.
I did not want to produce images, I did not want to press the button.

This relationship to quantity, this kind of “gluttony” for photography made me very quickly and without hesitation decide to move towards the job I do today.


And before the Pompidou Center …
I worked at the French Photography Society, the oldest photographic institution in France, which was founded in 1854 … It is an extraordinary collection of pictures of the 19th century.


How do we go from Pompidou Center to SFMOMA?
I worked for ten years at Pompidou as Director of the photography department. I was very happy at the Pompidou Center but when SFMOMA approached me and told me that they were going to open the largest space in the world dedicated to photography as part of a museum of modern and contemporary art… It made me think twice.


In terms of collection, Pompidou is about 40,000 photos while the SFMOMA is 20,000 photos. The collection is obviously smaller here but it is a very large American collection. And what really excited me when SFMOMA came to offer me this job was the exhibit space. It’s an amazing playground, and I have the the possibility of making a larger number of annual projects compare to what I could at Pompidou.

On top of that, it’s important to highlight that there is a great photographic tradition in San Francisco… Since the 19th century, there have always been many photo studios in town. It goes back to the days of goldpanners who wanted to send portraits back to their families.

The combination of the space, this photographic community, this importance of photography in San Francisco made me want to join SFMOMA.

How are acquisitions of photos done at SFMOMA?
Collectors are often asked for donations or loans for exhibitions. In Snap+Share exhibition for example, we have a number of pieces that come from local collections.
And then, we develop an acquisition budget; we have an acquisition committee made up of about forty people who pay a membership each year, which allows us to develop a real “acquisition policy”. This committee defines the priorities and the main axes.
Since my arrival, we have made about fifty acquisitions, which does not mean 50 photographs; an acquisition can represent for example 7000 photos. We make a lot of acquisitions every year.


The funding of museums is different between France and the United States. Did it involve a whole re-learning for you?
In fact, it’s not as different as what you would expect. When I joined Pompidou more than ten years ago, we had a public grant that helped with acquisitions, but it has been declining every year.
So I had set up an acquisition group for photography at the Pompidou Center composed of thirty people, Parisian collectors who helped us making new acquisitions by donating money every year. This was not a substitute for state endowment, but it reinforced it.
I started fundraising in Paris before coming to the US and by the end of the day, the practices are quite similar.

What are your lines of exploration for the next two years?
In July, an exhibition entitled “Don’t, Photography and the Art of Mistakes” will open, an exhibition on the issue of photo mishaps. It is a way of revisiting the collection that analyzes how things that were considered as errors – I think for example about blur, polarization, double exposure – have since become aesthetic effects.

We will associate manuals from the 19th century or early 20th in which beginners were told for example “do not put your shadow in the image, it spoils everything!”.
They were told not to do what would become an art of the great masters of the 20th century like Man Ray, who did everything the textbooks told him not to do.


What is your approach to the digital phenomenon?
There will be more and more screens in museums, there is no doubt. This is neither good nor bad, it’s something to consider… Maybe the museum will become all screens in the next generations, then the question of the museum itself will be asked …

We are in such a moment of evolution that it is impossible to know what will happen. This is a very important issue that we play, look at the exhibition Snap+Share, it is an exhibition on photography but there are things on the wall, on the floor, on screens.

I would also like to talk about several monographic exhibitions to come in 2019.

Your favorite place in San Francisco when everything goes wrong?
My job is not always easy. When I’m completely down, I go to the museum. I sit on one of the benches in front of a piece of art, and I find the energy and the reason why I do my job.