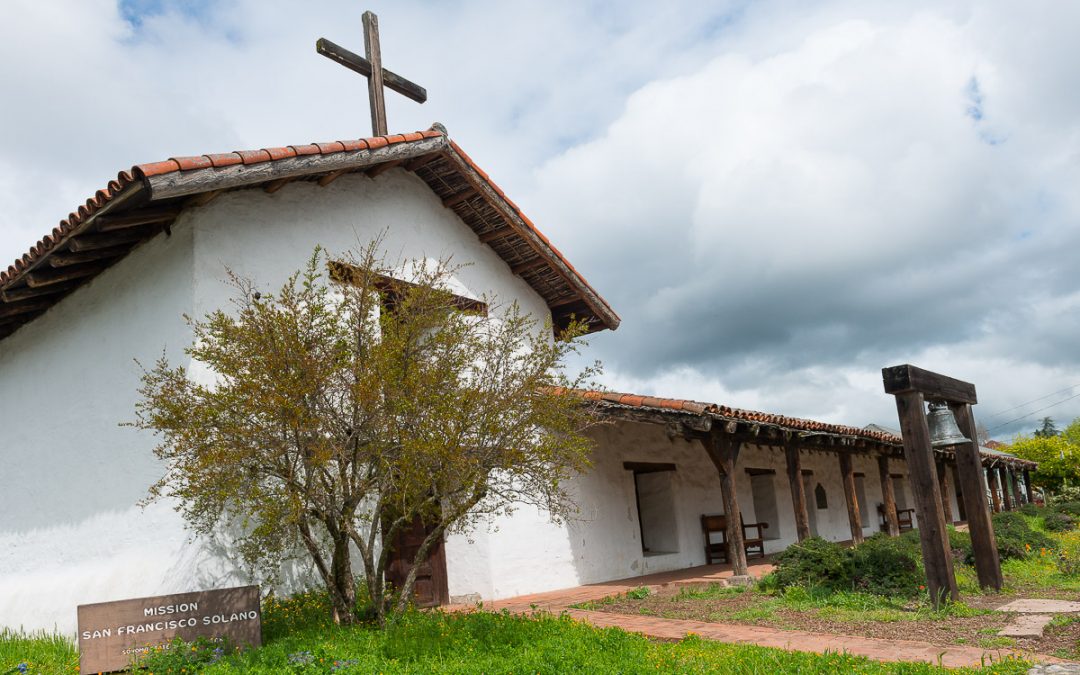 When you think about Sonoma, you immediately think vineyards almost as surely as when you talk about Napa. Less than two hours north of San Francisco, you can visit a quiet little town with a rich history. Sonoma, where history meets grapes.

Take advantage of your trip to stop a few miles before Sonoma and visit the small missions museum on the property of Cline Cellars (http://californiamissionsmuseum.com/about-the-california-missions-museum/). There are 21 models (at scale) of the different missions built along the Camino Real from San Diego to Sonoma. 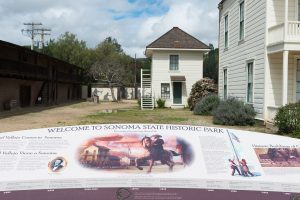 When you arrive at Sonoma Square, previously known as Solano, you will already be in the mood to visit the San Francisco Solano Mission which was the last mission created in California (ticket is $5 as of 2019 and valid for the Barracks entrance)
Founded on July 4th, 1823, it is the most northerly of all missions, with the Mexican government aiming to block the expansion of the Russian colony based at Fort Ross, near the coast a few miles west.

For those who would have forgotten, Alaska belonged to Russia from 1732 to 1867. The main objective of the Russians was the fur trade. At this stage, they were only a few priests in Fort Ross, but the Mexican government did not want them to move inland.

A mission was not only a religious building, it was also a farm that grew as the natives were converted. Sonoma mission counted about 900 people. 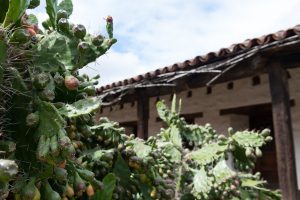 Secularized in 1834, the mission served as a parish church in Sonoma until 1881. It was then sold and became a hay barn, a blacksmith shop … Today, there are only 5 rooms of the original complex which had 27 at the height of its activity. The mission became State property in 1906 and were restored over the years.
This building, which can be visited, is the oldest in Sonoma.

After visiting the mission and its chapel, just opposite you will discover the Blue Wing Inn … built in adobe. It started as a hotel but was converted into a gambling hall during the gold rush.
Although it is not opened to public, look through the windows, it’s rustic but you can get an idea of ​​the 19th century atmosphere. The place has been owned by the state since 1968 and a restoration project is under study. 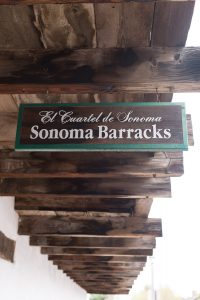 Take a walk on the opposite sidewalk and visit the Sonoma Barracks (same ticket as the mission one). The construction (1834 to 1841) took place under the orders of General Vallejo, to house his garrison. The staging is well done and the video projected in the last room interesting.
Do not trust the calm that reigns today in these buildings, because from 1835 they were at the origin of more than 100 military expeditions in which confronted Native Americans and Mexican soldiers … Guaranteed western atmosphere!
The state bought the Barracks in 1958 and partially restored them.

Stay on the same sidewalk and walk west. You will inevitably see the Toscano Hotel. The structure was built as the main residence of General Vallejo under the name of Casa Grande, which had become a place where politics and the future of North Bay were discussed. 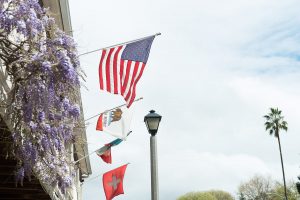 In June 1846, some pioneers returned to the small town of Sonoma creating the independent Republic of California, whose flag displays a bear on a white background. That was the beginning of the California state flag when it was (briefly) an independent nation.

Since then, Casa Grande has become Hotel Toscano. You can see the interior decoration perfectly restored from the street.

Your history appetite is not satisfied yet? Continue on the same sidewalk as the Hotel Toscano, towards 3rd St. west and walk to the end of the park. This is where the famous General Vallejo built his house after he was elected Senator of the State of California. It is a beautiful Victorian Gothic piece.
For the record, the first building elements were shipped pre-manufactured from the east coast and so passed Cape Horn… We let you discover the architectural details, the park and the outbuildings.

Sonoma, it’s not just wineries, it’s also a great story in Northern California and it’s worth a visit.

Park hours – 10:00 am to 5 pm every day. Closed holidays include Thanksgiving, Christmas and New Years Day.

Best Halloween Pumpkin Patches 2020 in the Bay
Alcohol free wine is not impossible, it’s here!
Video - Yosemite by American Photographer Ansel Adams
Using the BART from the airports to San Francisco or Oakland
Scary but safe, Halloween 2020 in the Peninsula
In Steinbeck footsteps, a video report from Salinas to Monterey