Archived: JR: Sketches of The Chronicles of San Francisco at Pace Gallery in Palo Alto

JR: do we need to introduce him? Maybe you were here last year, in January 2018, when JR and his team parked his truck turned into a photo studio, in different parts of San Francisco to capture the portraits of each other, you and me, personalities, homeless people, emblematic figures of San Francisco.

Inspired by Diego Rivera’s murals, some of them in San Francisco, JR decides to make San Francisco his new playground to create, for the first time, the portrait of an entire city through its inhabitants. More than 1,200 people were photographed, filmed, interviewed to create this portrait, trying to show its often extreme antagonisms, from the richest people to homeless children, to all the most colorful characters San Francisco has to offer. 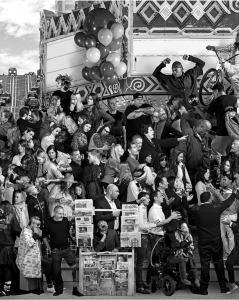 This giant portrait of the city is being installed at SFMOMA, but in the meantime you can see (and buy) extracts from this monumental mural. You will find them in the traditional form of black and white prints framed but also in the form of lightboxes  in video version, or in collage under glass in 2 dimensions demonstrating the creative process of assembly of all the characters.

We are not going to lie to you, we have been long time fans of JR’s work and the socio-economic dimension of his projects, and his permanent desire to put art on the street, accessible to all. We can not wait to discover the final result at SFMOMA in May 2019, but for the moment this exhibition is like a preface and we can spend hours by getting lost in all its faces, recognize them, imagine their history and feel part of it, and fall in love with San Francisco all over again, or for the first time. 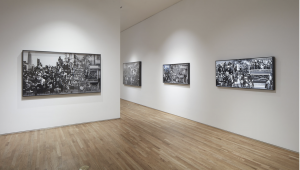 The exhibition takes place from February 6 to March 24, 2019 open access.

French King's cakes in San Francisco and the bay area...
It's official, drought is over in California
The wealthiest man of San Francisco was from France... from Brittany to be specific
Discover petanque in the San Francisco Bay area and have fun
In 2021, Bastille Day will last a whole week!
Kelsey Westphal @VillaSF, in the tracks of local counterculture

Do you know the DAHLIA GARDEN in the Golden Gate P

yes … Fleetweek is back In San Francisco… What

🇺🇸 To do this week-end: go and see the stunn